Back on Topps Sneak Peek 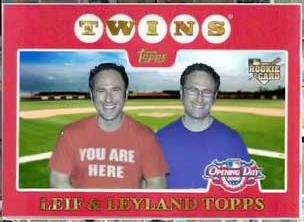 Deadspin has gotten the Sklar Brothers to show everyone a sneak peek of the web series Back on Topps.

In the first episode, the premise for the series is set in about 12 seconds explaining a lot of what I described in my original report on the series. You are then quickly introduced to Gaylen Briggs, the hot shot supervisor who is making the decisions instead of Leif and Leyland, who slams down Mitchell Report Before & After cards put out by Topps' "competitor" in front of Leyland in his office. The cards were the "competitor's" hottest set from the past month and Briggs wants to have his own set of scandal cards that hit shelves when the scandal hits the paper.

Cue the first completely random interjection: Bob Tewksbury makes headlines for being involved in a cat fighting scandal. The report later turns out to be false.

Leif, meanwhile, is with his wife (one of those rich, stuck-up types) at the hair salon where he for some completely random reason starts flipping through the appointment book from the salon. Inside, he finds names like Manny Ramirez, Pedro Martinez, Randy Johnson and Vin Scully. So what does that mean: The Paul Mitchell Report - players who have enhanced hair that gives them an edge.

Cue second random interjection: Sweet mullet of Gaetti, the line of the series so far.

While this is only half on one episode, I like it. The Sklar do have a lot of lame humor in their act and this video shows that there will be some poor acting, but with all the guests who are scheduled to appear, now including Greg Oden, the schemes Topps comes up with could become very interesting.

One thing I did notice was that the card of the Sklars (pictured above) is numbered UH284, but it is the Opening Day design. Perhaps Topps wouldn't let them use an actual Update and Highlights card, but you would think they would just use a number not in the set in order to keep the design and numbering right.

When I know more, you'll know more.
Posted by Andrew Harner at 7:03 AM

Labels: Back on Topps, Card of the Day, Sklar Brothers

It proboley some kind of half ass short print in Topps Update and Highlights like Wally Polnuts or whatever it was last year.

The sad part is that you might be right knowing them.

Ah man I just gave Topps an idea. I better get 10% of what they make.