Has Topps Jumped the Gun Again? 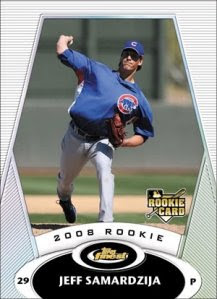 First, it was Johnny Cueto. Second, it was Jay Bruce. Now, Jeff Samardzija?

When you look back on the Finest Rookie Redemptions from 2008, the names don't stick out too much now other than Kosuke Fukudome, who was the third redemption.

Topps jumped on Cueto with the first redemption on the day of his second start just because his first start saw him strike out 10 Diamondbacks over seven innings. Now, Cueto stands at 7-9 with a 4.90 ERA. He does have 113 strikeouts but hasn't won since July 3.

Another Reds rookie, Bruce, jumped out to a fast start in late May. From his debut on May 27 to June 2, Bruce was hitting .579 with three home runs, including a three hit debut. Now, Bruce is now hitting .264 with seven homers. He did recently enjoy a 12 game hitting streak, but his power stroke has gone down since his early start, having just six extra base hits this month.

Now, we have Samardzija who has struck out five batters in his first four innings and recorded a save for the Cubs. He has allowed one run and two hits, both which came in a blown save in hid debut.

Given the track record of the other rookies featured in the Finest set, Samardzija may have more blown saves in his future.

Or, it could be that Reds rookies are streaky and Cubs rookies are solid. Those are the only two teams to be represented in the Finest Redemptions in case you hadn't noticed.
Posted by Andrew Harner at 2:46 PM

Well that sucks. I have redemption card #4 and now I see that it's a total waste. At least I was lucky enough to also get redemption card #2, which is the Jay Bruce autograph. Where's Evan Longoria?