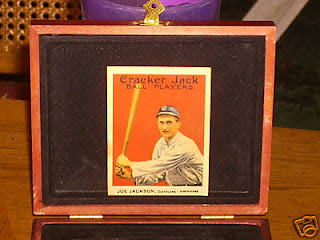 Back in 1915, things were different. There was no Topps, no Upper Deck, no patch cards, no certified autographs, etc. What there was, was Cracker Jack and other company produced cards.

That was also the year that my grandfather was born in. When I heard he passed away this morning, a lot of thing went through my mind including the idea for this blog post hours after the fact.

What would it have been like to collect cards through his eyes?

He was never much of a sports fan and certainly never a card collector as far as I know, but if he would have been, think of all the new trends he would've witnessed.

Assuming he began collecting around the age a lot of people do, he would've started in 1920 or so when there was limited cards around for a child to get their hands on. Basically the only cards of note from that year are strip cards, but in 1921 Exhibits post cards debuted and many people would have collected them.

I can't imagine what it would be like to be trading Babe Ruth cards with my friends in the one-room schoolhouse only to have the teacher hit me with a switch when she realized I wasn't paying attention. When I was a kid, cards were sometimes traded on the playground where you couldn't get in trouble as easily.

Through his elementary and teenage years, he would see gum companies like Goudey begin to produce cards and would possibly get some cards from the Wheaties box or other food products mom might have had in the house. If he were lucky, he would convince his mom to buy those food products that had cards on them even if they cost just a little bit more. 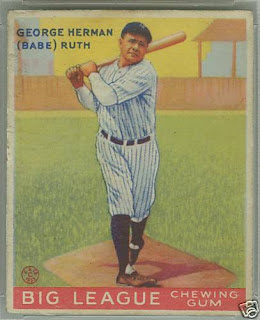 To think that someone could have been holding a Babe Ruth Goudey gum card without knowing it would be thousands of dollars years down the road simply blows my mind. Of course, at that time, who would ever guess? I add the part of about asking mom to buy the food products with cards because I know I did that when Post or Hostess had promotional cards and I always wanted the Wheaties boxes with the sports stars.

After serving in the war and becoming an adult, the beginnings of a serious card collection would have taken off in 1948 when Bowman was introduced and again in 1951 when Topps entered the market. By building sets, he would slowly be creating a future fortune despite his wife just wanting him to get rid of and stop buying cards. Being true to his nature, he would continue buying and saving until he could share packs of Topps cards with his only son throughout the 1950s and early 1960s. They would try to put the complete sets together with the son getting the extras to put in his bicycle spokes or to trade with his friends. A few Mantle cards were lost here, but it was all in good fun so no one worried about it. 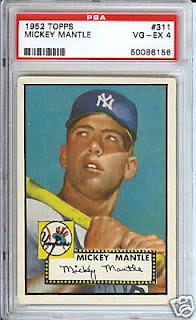 Just imagine all the Mantles, Robinsons, Roses and key rookies he may have had in his collection. As an adult, the cards would've had a good chance at staying in good shape and would make any vintage expert today salivate. Year by year, the sets were stored in the attic collecting dust and the occasional visit from the mice, but those shoe boxes would not be lost forever.

With all his kids grown up and out of the house, his collection would take another turn in the late 1970s and especially in 1981 when Donruss and Fleer joined the card race. With more and more cards popping up and with him aging, his collection began its decline. Not only that, he had grandchildren to spoil anyway. Anyone else have a grandfather who would fill his pockets with change and then sit in the easy chair that would always empty your pockets? 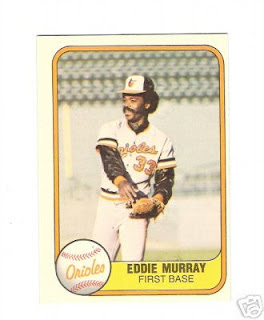 Ten years later, he would begin sharing his passion for cards with two of his grandsons. Hitting 70 years old, he would begin to just buy packs for his grand kids instead of himself. Eventually, the confusing nature of today's hobby would be hard on his mind, and in 2000, which is when he would've been likely to stop because the the two grandsons could make good hobby related decisions on their own, it would be difficult for him to determine which packs to buy for his grandsons so he would turn to his daughter in hopes she would know. 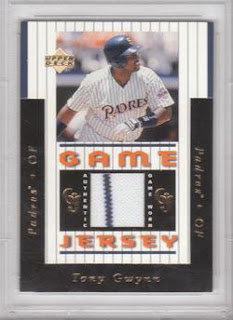 After moving out of house a couple of summers ago,the family would have found an attic full of vintage cards some of which would've been added to my PC as a living reminder of my grandfather.

And while this didn't happen, I don't need this little story to be true to remember him. I have plenty of other living reminders sitting around here which seemed a little cumbersome when I got them over the past few years, but I now am grateful that I got all that stuff.

He'll be missed by all, but we all know that 92 years was a whole lot longer then we ever expected his life to last.
Posted by Andrew Harner at 6:51 AM

Condolences on the loss of your
Grandfather. Mine past away several years ago. He was a die-hard Yankee fan and it would have destroyed him to know that they are taking down his beloved Yankee Stadium (it is really pissing off my own dad).

One of the best memories I have of my grandfather was going to "Senior Citizen's" games back in the late 70's with him. Cheap tickets out in left field, and yelling at Lou Pinella.

I have 3 kids of my own now. I would really like them all to get to the stadium before it's gone. Especially since their Greatgrandfather was there on opening day in 1923. The circle would be complete.