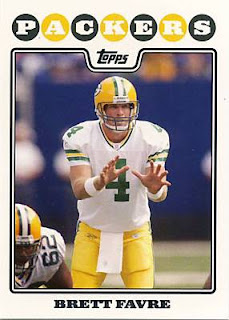 After taking a tremendous amount of heat from collector's across trading forums and the blogsphere, they can't help themselves but put out gimmick cards. With no lower end baseball products due to be released anytime soon, they did the next best thing and went and messed with the football base set.

On the brink of what everyone thought might actually have been Brett Favre's real retirement, Topps created two gimmick cards as what they call "paying tribute" to Favre's legacy. 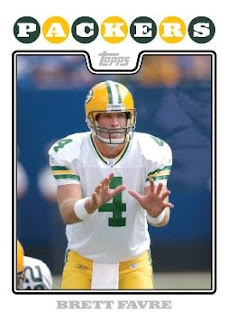 The first of two cards, categorized 34b and 34c, features a silhouette of Vince Lombardi peering over Favre's shoulder as he takes a snap. 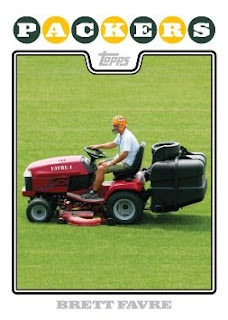 "We thought it would be cool to pay tribute to Favre as a legendary Packer and the fact that he was retiring, at least we thought he was, as one of the all-time great Packers," said Topps spokesman Clay Luraschi. "Packers fans see Favre as a legend, hence the Lombardi face card. And Favre is not going into retirement quietly, hence him driving a tractor with his helmet on."

Luraschi may call it a tribute, but many collectors may call it tom foolery. Seeded 1:12,000 packs, collectors would need to bust through 300 boxes before reaching the odds on these cards. Oh and also, these cards are definitely not cool anymore.

The one thing Topps did right with these Favres is that they also produced a regular base card that was printed in the same quantity as all other base cards. I know, I pulled one from a hobby box.
Posted by Andrew Harner at 6:09 PM

WHY SO HARSH ON TOPPS. I THINK THIS WAS AN EXCELLENT IDEA TO PAY "TRIBUTE" TO BRETTS LEGACY AS A PACKER! I MEAN IT ALSO GIVES KIDS WITH THE LIMITED ALLOWANCE TO HIT A PULL OF A LIFETIME. THATS WHAT THE BASE TOPPS PRODUCTS ARE AIMED FOR....KIDS, DONT FORGET THAT... NOT SOME 40+ YEAR OLD GUY THAT HAS UNLIMITED FUNDS TO BUY PREMIUM PACKS. AS A COLLECTOR FOR WELL OVER 20 YEARS I THINK THESE TYPE OF "GIMIC" CARDS BRING LIFE BACK TO AN INDUSTRY THAT HAS REALLY TRIED TO TURN THE FOCUS BACK TO KIDS AND COLLECTING! I COOMEND TOPPS FOR A WELL DONE EFFORT! ZORN4PRESIDENT