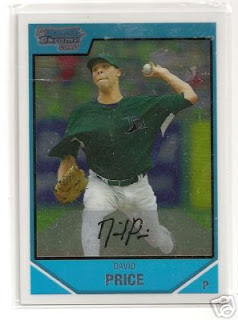 Had Razor Collectibles made their decision about signing top baseball draft picks to exclusive contracts a year sooner, this card would not exist. Sadly, that is the case for several top picks in the 2008 draft.

Starting on June 24, Razor started signing baseball draft picks, and they started large by nabbing the #1 overall pick Tim Beckham to a three-year exclusive contract that covers all autographs, base cards and inserts until Beckham make the Major Leagues. This contract prohibits Topps from producing Beckham cards its annual Bowman Draft Edition.

To a lesser extent, Razor signed overall pick #106 David Adams to a contract yesterday, but his exclusion from Bowman Draft will not have nearly as much effect as the exclusion of the others mentioned above will.

There have been previous attempts to compete with Bowman in winning over collectors with prospect cards, but none of them have too successful. Donruss Elite Extra Edition did provide some good autographs, but the Bowman Chrome Draft autographs still were more sought after. Just Minors produces cards on a minor league license and have never really been known for their high quality.

But, this may be the first set that actually competes with Topps directly. Assuming these contracts are what they sound like, Topps will have to come up with something creative to try and get the rest of the top picks before Razor does. It will also give Topps incentive to sign all of 2009's draft picks before Razor does. It will be interesting to watch and see who signs with Topps and who signs with Razor as time goes along. If Topps knows what's good for them, the will be jumping on the rest of the top 10 before Razor does.

Not bad for a company who has previously only released poker cards.
Posted by Andrew Harner at 7:20 AM