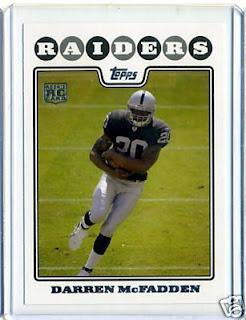 With 2008 Topps football dropping today, over fifty Darren McFadden individual cards or lots/sets with him included have hit eBay.

Because if the way Adrian Peterson rushed last season, the big story in ever new 2008 product has been the McFadden cards. Even Beckett made him their hot list pawn by featuring 17 of his cards in the July issue of Beckett Sports Card Monthly and 13 in the August issue. Unless he tanks, both of these trends will continue.

The market for McFadden is not the only player's cards who have benefited from the Adrian Peterson Effect. Other top running backs like Rashard Mendenhall, Felix Jones and Jonathan Stewart have all had higher-than-expected values in the early going. Another reason some of these lower-end backs are getting more notice probably has to do with Marshawn Lynch. No one expected him to put up quite as good of numbers as he did in Buffalo so collectors are rushing to the backs that are similar to him.

The only problem I see with the second-tier backs from the draft is this: it is unlikely any of them will start the season as their team's starter. Carolina has DeAngelo Williams ahead of Stewart, Pittsburgh has Willie Parker ahead of Mendenall and Dallas has Marion Barber ahead of Felix Jones. That being said, the Vikings had Chester Taylor ahead of Peterson last seaon, and while Taylor is a tier below all the starters I just mentioned, Peterson is better than them all. So if one of these rookies starts to look like him in their limited playing time early on, watch out.

Nevertheless, I think it's foolish to think that all of these guys will turn out to be superstars. For every LaDainian Tomlinson there is a Ki'Jana Carter. But, for every Randy Moss there is a Marques Colston so for all I know, I could be talking about Tim Hightower the Cardinals fifth round and 149th overall selection.

But for now, the focus is on McFadden, and he has seen more than just his base card pop up on eBay. A Rookie Permiere Quad Autograph of McFadden, Stewart, Mendenhall and Jones has appeared on eBay for a Buy-It-Now price of $700 or it will sell to the best offer. In the eight hours it has been listed, there has already been one declined and two pending offers for it. There also is a Black parallel numbered to 53 that has been bid up to $52.22 in the past 24 hours.
Posted by Andrew Harner at 2:00 PM