Making recycling sense out of the hobby 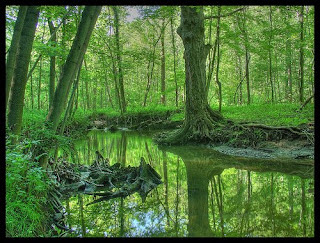 Almost everything anyone does anymore has some negative effect on the environment. Some things more (dumping oil into the lake...that's a no-no children) than others (leaving a light on while you go downstairs to get dinner), but have you ever thought about the negative environmental effects the card hobby has? If you haven't, maybe you'll find some of this eye-opening, but if you've given it a thought or two, maybe you should help spread the word around the online card world.

There are two main areas of concern for the hobby: shipping cards and manufactures packaging. I'll start with the former. 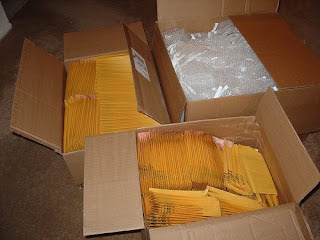 For anyone who has bought or sold on eBay, made a sale or trade on an online forum or has received or sent cards in the mail from some other source knows that cards are commonly sent in the tough bubble mailers. No biggie right because all sorts of companies use bubble mailers for various shipments. Well, if that's your train of thought, here's a question.

What do you do with those mailers after you get your cards from them?

You basically have two choices:

1. Toss it in the trash
2. Pull all the stickers off of it and put in a box to reuse

The life of a bubble mailer, if packaged and opened well by all parties involved, is around 3-4 trades. I have received mailers than has addresses crossed off and mine put over the old one. I have seen mailers where people have taped a new address sheet over the original address. I have seen mailers with more than one color of tape on them. And after I get mine cards from them, I put my customer's address over top of mine and send the mailer back into the world for someone else to pitch or reuse. 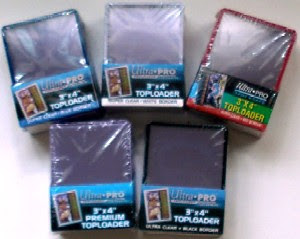 Other big recyclable items in the card buy/sell/trade market are penny sleeves, top loaders and team bags. All three of these items are customarily used in I would say at least 50% of all transactions which makes them an important commodity for you if you are selling or trading. Until ripped, penny sleeves and team bags can reused as many times as you please. If the sticky stuff on a team bag is gone, scotch tape is the answer. If your top loaders have multiple price stickers or lots of tape over them, ship them off to the next guy with the penny sleeve that has five different price stickers on it inside it. There is at least one trader on the online forums who requests that you use used materials like this. His name escapes me at the moment, but I will post it here if I find him again.

Finally, small 200 and 400 count boxes can be reused over and over as well. I don't know how many of these smaller boxes I have with my address scribbled on them. I mostly reuse those boxes to hold small sets or small player collections, but I do tape paper over them occasionally and ship cards out in them. Boxes can reused many times, but no matter the size, they do wear out after awhile.

For anyone who has picked up a blaster box from your local Wal-Mart or Target recently knows how much space those ten packs really take up. For those who don't know, it's not much. However, the companies still put the packs in a box that could at least twice as many packs. I understand that they need to have their logo big enough for people to see along with big lettering on why you should buy their box, but these boxes really could be cut down in size. And with as many blasters as there are, that's a lot of cardboard. 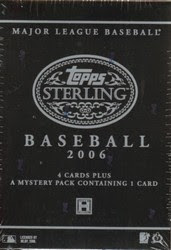 The bigger problem lies in high-end products. Products like Topps Sterling which only have five or six cards in them still come in a normal sized box. Why can't these products be like base Topps which houses its 36 packs in a box exactly the size of the packs? I know there aren't as many of those, but the extra cardboard used in those would still tremendously help save a tree or two. 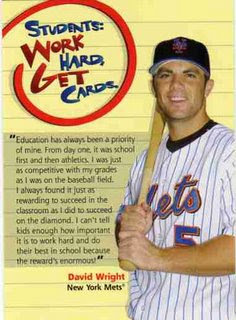 What about those extra damaged base cards you have sitting around along with those annoying decoy cards found in packs? Don't throw them away. Use them in the shipping process, write notes on the backs of decoys or donate the damaged base to a hospital or other place where children are in need. That way, they get more use than they do getting smashed in by the garbage truck.

I'm sure there are many more environmental issues surrounding the card world. I'm sure those serious environmentalists from above would say this entire hobby is wasteful because the cards themselves are made from cardboard, but I'm pretty discrediting their opinion since they don't understand this hobby. I'm not ripping on those who love the environment at all, it's just that only serious card collectors can get the feel of community that can build by cards, the rush of seeing the hit and the timeless memories produced from a childhood filled by cards.

So if you like how this business is run right now, take a step and see if you can't recycle a thing or two you have lying around right now.
Posted by Andrew Harner at 6:06 PM

I can tell you why blaster boxes are so big: shrink. Stores would stand to lose a lot of dough if the card boxes were smaller because they'd be easier to steal.

Which is also the reason for several of the annoying inserts in retail packs, they have security devices in them, or they can anyway.

This is one of the most thought-provoking posts that I've read on any card blog. Thanks for that! I usually do throw out the bubble mailers, top loaders, and penny sleeves that people send me cards in, basically because I don't want to have them laying around the house. But I am sure that I can find some space for them and reuse them when I send cards to other people. It'll save me some money too!

What about all the wrappers as well?

Are they mylar? What exactly are they made off?

I often re-use items, but whatever I can't, goes in the recycling bin.

After all, the cards are "cardboard" or considered "chipboard" which is recyclable.

I don't know what the wrappers are made of which is why I didn't include them in the post. I know there are some products that have different materials used for packs. Some are foil like and others feel like plastic.

For the materials you can't reuse, you also might check if your city has a recycling program. I know recycling used to be complicated, but now where I am (Conway, AR), we have a separate trash can for recycling. All you have to do is toss your cardboard and certain plastics in there, and they pick it up. It's really easy.