Sportkings' big price tag does not equal a big return 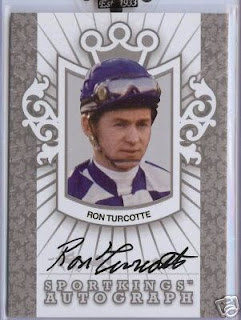 After going live yesterday, almost 200 Sportkings cards have appeared on eBay. The $350+ price per box is highway robbery when comparing it to the secondary market value of the actual cards.

So far, only a few single card auctions have ended, all via Buy-It-Now. Included are three autographs that went for $75 each and a Lou Brock base card that sold for $12.99.

Many cards are ending today in about 6-12 hours. Of them, the base cards have been bid up to the $10-$20 range with commons only garnering $5 or less. There hasn't been much significant activity on any of the autographs and relics yet, mostly because many of them have high starting bids or Buy-It-Now prices.

Take this guy for example. It appears he dropped about $700 into a couple boxes of Sportkings and pulled nothing spectacular. Now, he has listed his hits for prices he will never get in hopes of getting his money back. While these cards are limited in production, no collector's are stupid enough to pay top dollar for singles.

I always enjoy watching collectors who think they can buy this box fro $350 and then sell the hits for more. Historically, there have been so many high end products that do not yield nearly as much secondary value as the price you paid. Nevertheless, collector's continue to splurge in hopes of pulling one of the rare cards that will actually put a decent amount of cash back in their pockets.

I can't wait for the YouTube breaks displaying frustration to begin appearing.

I'll end on this: if anyone ever complains about their Sportkings box to me, I can't have any sympathy for them because a little market research will show that the odds of making good on the product are slim to none.
Posted by Andrew Harner at 9:18 AM

I am a ridiculous Andre Dawson collector. I have 2 Triple Threads, 2 cards #'d to 5, and both cost me less than the 1 HIDEOUS Sport Kings card that some doitch bag just listed with a BIN of 250 bucks, which he says he expects to get for it.

What the hell is the point of this product anyway?? No team logos, horrible photography, painted over photographs that don't even look like the actual person. Yechhh!

I honestly think that this product was created strictly because they could produce a Pete Rose card that would make collector's go nuts.

Now, they tried to make the product better by reducing the amount of jerseys and giving you a whole two more cards for the same price, but no Pete Rose.

The low secondary market value for these cards may put them out of business in a few years.

What secondary market are you guys referring to? The one that's been hammered by the economy for over a year now?

My prediction is that there will be at least a Series E. That means at least 3 more releases since this Series B. I bet I'm right. I've enjoyed watching all the nay sayers. Keep it up. It's only helping those of us that love this product.

Did you guys see how fast their Super Box promo sold out? 140 boxes gone in a couple of days! It was such a success that they are going to release another Super Box. People are starting to come to their senses about this outstanding product. I only hope most of you wait until I'm done building my sets.