Topps Update and Highlights Looks Better Than Ever 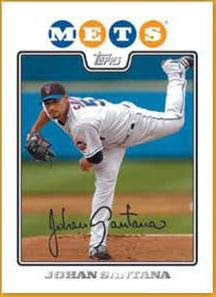 Information for 2008 Topps Update and Highlights has been released by Topps, and the set looks like it may be the best U&H release ever. The set is dated for release around October 3. Each box contains 36 packs of 10 cards.

The base set will be set up the same as it has in past years with veterans (197) and rookies (45) taking up the update portion of the set. The highlights follow and include Season Highlights (10), All-Star Game (60), Home Run Derby (8) and Classic Combos (10). The also includes a traditional Johan Santana Mets card, an Even Longoria RC, a Josh Hamilton Home Run Derby card, which is bound to very popular and a Kosuke Fukudome rookie, card number one. 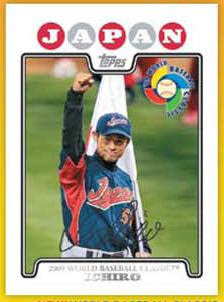 The same parallels, Gold, Black, Platinum and Silk, that have been used for regular Topps can be found in Update and Highlights. This year's insert line-up is the following: Year in Review (60), 2009 WBC Previews (25), Take Me Out to the Ballgame (1), Mickey Mantle Story (10) and Hobby Sketch cards (100 1/1s) which one per case. 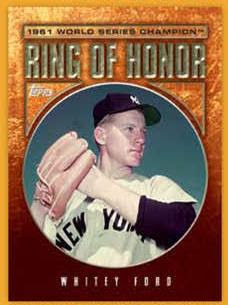 Topps is also introducing the popular football set, Ring of Honor to the baseball card world. For the initial baseball release, 10 World Series champions including Whitey Ford from 1961 will be featured. The set will come in Gold and Autograph parallels. To sweeten the set, Topps decided to feature its first team in the Ring of Honor series with the 1986 Mets. The following ten players from the team have regular and autographed Ring of Honor cards:

Other autographs in the set come from the 2008 Highlights set, it seems that autographed highlights are going to become a staple in the Topps arsenal. The U&H autograph checklist features a wide variety of players from superstars like Longoria and Hamilton to relatively unknowns like Greg Smith and Jo-Jo Reyes. Maybe Reyes actually pitched a Minor League no-hitter? 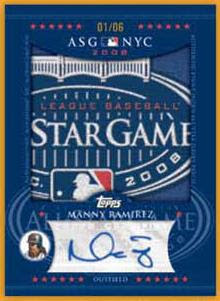 Another aspect of football that Topps has secured for 2008 U&H is the exclusive All-Star Game cards. Just like the Pro Bowl cards they produce for base football Topps, U&H will bring exclusive 2008 All-Star Game relics and autographs including jumbo patches and autographed relics. These come at a perfect time since everyone wants to get a piece of Yankees Stadium history and this will be one way to do it.

Finally, a box loader will also be found in every box, and they include all the best rookies in the game on Chrome refractors. Collector will also have the chance to pull an original T206 or T205 tobacco card framed inside a standard size card.

But before you think, "How exciting, a new 2008 product with just baseball cards," let's explore some of the political cards that will be included in the product (and yes, there are several).

The first of the sets sounds a little interesting, the Presidential Stamp Collection. While I am not a stamp collector, I have always thought that stamps and cards go well when put together. I just wish they were putting original baseball player stamps on cards instead of original presidential stamps. It would be neat to get my hands on a George Washington or Abe Lincoln one though simply because of the historical value the card would gain due to the stamp.

Secondly, we have the Presidential Couples insert. Seriously Topps? You are featuring all the presidents and their first ladies on the same card? I thought the dual Campaign cards from Topps Series Two were bad, and now we have these. When will the madness end? 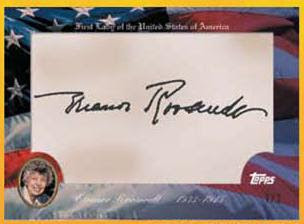 Not only that, Topps now is producing First Lady cut signature cards. Why don't they just come out with Topps Pop Culture & History and put them in that set instead of Topps Update and Highlights?

The third set they have is a two card set of Barack Obama and John McCain in which collectors holding the card of the winning president can mail in their card and will receive some sort of prize within the next three years.

So assuming the rate at which you pull these political cards isn't very high, this could become one of the best products of the year simply based on all the new sets that are being brought into the baseball card world. Like I said, Ring of Honor is a vastly popular football set and could really catch on with baseball given the amount of World Series champions there have been. Perhaps this will lead to baseball Dynasties cards? If you're reading Topps, I for one, think those would catch on just fine with collectors.

Of course, this is a Topps product so you have to wary of the ever-so-unpopular gimmick card. With Poley Walnuts, Joba Chamberlain and Jacoby Ellsbury cards being affected last year, who knows what may happen to some cards this year? They wouldn't dare mess with Fukudome again would they? Hey, at least the WBC Fukudome in this set is legit.
Posted by Andrew Harner at 7:39 AM

Any idea when they will grace us with a checklist?

If you visit http://www.blowoutcards.com and search for this product, there is a link to a checklist in Microsoft Excel format. There are still some holes in the base checklist marked with TBA.