Another strike against Razor 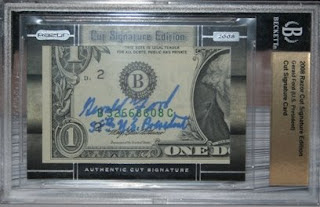 Just yesterday I was explaining the Razor Cut Signature Edition and how it took away some of the credibility they had gained from signing top baseball prospects.

Now, they are going one step further with the cut signature cards, and they stepped on the cat's tail on the way down the stairs.

Let me get all this straight, for $2,000 I can take the chance of getting George Washington's signature. Alright, that is fair. However, with my luck, I would pull Bill Clinton who's signature isn't worth but a few hundreds of dollars. Razor tries to lure in collectors by advertising that just 99 boxes have been made and you may pull a dual cut signature card, maybe even the John Kennedy/Jack Ruby. And it must be good because each card is forever encased in a Beckett holder.

Except that it's not good at all.

I love Beckett's explanation of the price. They shrug it off like it's no big deal and just another hobby landmark.

"So, how much does a pack run? Expect to pay around $2,000—by far the most expensive pack in the history of the hobby. Be on the lookout for the product in the coming months."

I want to know who in the right is really on the lookout for this product. Who would ever buy this? You are almost guaranteed to lose to money as there are maybe 5-10 cards that will actually bring in $2,000 or more. I, for one, will not be purchasing any of these.
Posted by Andrew Harner at 6:46 PM