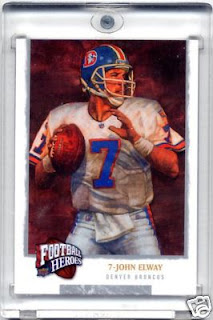 The Football Heroes series that started out as a tribute to Joe Montana, Joe Namath and Walter Payton in the early 1990s is now a full 300 cards set.

The releases hits stores today and is expected to be one of the better releases of the year, but not without a little controversy.

The set is broken down into sections: 100 Football Heroes, 100 Rookie Heroes, 45 Legendary Heroes, 30 Sports Heroes and 25 Guitar Heroes. The last 55 cards of the set do not feature any NFL players, rather the likes of Chuck Norris, Travis Pastrana, Les Paul and Carlos Santana. I plan to build this set, but I only plan to work on cards 1-245.

The sections also have different variations of each person. The Football Heroes have four different cards which are three action photos and a short-printed painting, there are 50 rookies with two cards each, 15 legends with two action cards and a painting, 10 Sports Heroes with three cards each and two or three cards of each Guitar Hero.

There are tons and tons or relics and autographs in this product which average four per box. I understand there to be 500 different rookie autographs, 300 different current NFL star autographs, as well several tiers to the Legends and non-NFL likenesses. There are also 42 one-of-one cut signatures featuring NFL stars and other likenesses.

How do you plan to collect this set? There are many ways to do it with so many different variations of each player. You can go cards 1-300, just the football players, one of each player, just the paintings and the list goes. As I said, I am planning to just collect the football part of the set. I will try to get a couple of the guitarists that I like, but not with the intent of getting the entire subset. I thought about just trying to get all the paintings, but I figured I might as well be serious about trying to collect an entire football set for a change.
Posted by Andrew Harner at 7:10 AM

Card #247 Chuck Norris...Chuck Norris won the World Series of Poker despite holding a seven of clubs, two of diamonds, a get out of jail free card, a joker and a green Uno card.