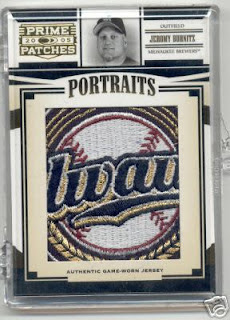 While Fake Patch Report seemed like it was going to be a revolutionary site for stopping the spread of fake patches, it hasn't been updated in months. However, a new site has been launched and my hope is that this one will take off and be a success.

The site, simply titled Fake Patch Page on Freewebs, was started about a week or so ago by a collector who is enraged at the fact that there are so many fake patch cards on the market.

For those who you who don't know much about these cards, a fake patch card is a patch card that simply looks to good to be true. Examples are MLB logos on high numbered cards, patches in cards with large windows, patches from special events such as the All-Star Game, patches inserted at odd or crooked angles, patches that aren't in the window securely or that have threads sticking out and anything else that simply looks way too go to be true.

Another big tip off to a fake patch is when you see a fantastic patch in a card that simply says "Game-Worn Jersey." This is the case with Burnitz pictured above and many other cards on both fake patch sites I listed above.

While most fakes are made out of cards of superstars, any common player can have a fake manufactured. It's easy to see why as well. The actual Burnitz Portraits jersey card like the one pictured above could be had for probably $2, but that fake patch sold for $31 on eBay.

eBay is the prime place to find these cards, and sadly, too many collectors aren't educated on fake patches and go ahead and buy them for very inflated prices. On eBay, keep a look out for all the factors I mentioned above as well as auctions that keep the bidders' IDs private. This is almost always a sign of a fake patch if the card meets one of the criterion listed above. Some well patch fakers on eBay include dmarcus8 (only when bidders are private), card-pimp and cards2pc. Be careful when bidding on their items.

I have reported numerous fake patch listings to eBay as counterfeits, but I have never seen any of those auctions cancelled. Basically, by ignoring these reports, eBay is contributing to the problem. I have sent e-mails to eBay regarding this issue with no response. Sure they are a company like anyone else and bigger fish to fry, but if they truly understood how bad of a problem this is, they might try to help the collectors out. I mean, it's no big secret that eBay is the biggest area to get sports cards on a regular basis, so I would think they would want to try and keep us happy.

The companies themselves can't be blamed for this problem as when they produced most cards that are being faked, they had no idea this would become a problem. However, they can be part of the solution.

Donruss/Playoff started a trend when they listed what type of game-used material is on the card. For them, patch or prime means that the card will have a patch in it while Game-Worn Jersey will mean it has a regular swatch in it. Once all relic cards have this type of denotation on it, we will have taken a small step in the right direction.

Secondly, the companies need to look out for these cards when they are on the market and file reports themselves or at least answer consumer questions about potentially fake cards. There was a very nice Omar Jacobs Exquisite card that I wanted to buy but feared it was fake. I contacted Upper Deck's fraud investigation team, and they simply told me this:

Upper Deck does not provide authentication services on products purchased on the secondary market. If you have concerns as to the authenticity of your item, we recommend you have the card independently authenticated by one of the many companies who provide such services.

That's not very helpful. A collector on The Bench Trading suggested that the companies document every serial-numbered relic card they produced on a website somewhere. That's all fine and dandy and would solve most of the fake patch problem, but the companies will never take the time to do this. They will have to pay a new person/people to do it and it would take a lot of time to scan each and every card,m which could push product release dates back. It still is something the companies should look into.

A more simple thing the companies could do is explain what types of patches/swatches were used in certain sets. A description of what was used could really help any collector figure out if what they are buying is real or not. This would also benefit those who are selling genuine multi-color patches that they pulled. However, does anyone really see this solution coming to be?

So that leaves us, the collectors, in charge of solving this dilemma. You can easily be a part of the solution by doing a few things.

1. Report any potentially fake patches you see as soon as you see them.
2. Talk to collectors on sports card forums about suspicious patches before you buy them.
3. Think logically about whether a company would really produce the card you are looking at. If there is any doubts, it's probably fake.
4. Investigate and see if a player ever wore the patch that is on the card. Sometimes, collectors will insert a patch into a card that was never used on a uniform.

Here is my final tip. Two of the most faked sets of all-time in baseball are 2005 Prime Patches Portraits and 2005 Absolute Memorabilia Tools of the Trade. Anytime you see a patch in one of these cards when it says Game-Worn jersey on the card, stray away because its fake.
Posted by Andrew Harner at 9:24 AM