Stadium Club is Back but... 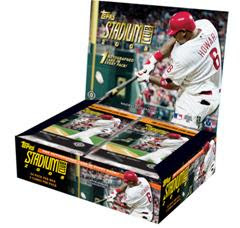 ...Topps has ruined it much like Upper Deck ruined Ultra when it bought the Fleer company.

Some of you may remember my post about Stadium Club earlier this year. If you don't you should read that first before you get into this post. Don't feel like reading it? Well, I have a small synopsis of it in the next paragraph.

Stadium Club started out as a premium brand, but slowly became Topps' answer to the insert laden Ultra in the mid-1990s. Once relic and autographed cards became the thing to produce, Stadium Club lost its feel because most of the inserts were now autographed or had a piece of memorabilia encased in them. The product was last seen for baseball in 2003.

Now, there are rumblings going on about Stadium Club SE or as I like to call it, Stadium Club Steroids Edition. Once a product that would produce a parallel and an insert in one pack is now a $225, 12-pack box with 12 autographs and one Yankee Stadium relic guaranteed. Not to mention they 24 numbered parallels you'll also get in every box. These numbers leave at most 23 base cards per box, which apparently will be similar to the 2003 Gold parallels in stock.

The original report on Fielder's Choice made the product seem just a little sketchy as he only got word of it from a dealer newsletter. However, the dealer is legitimate according to him. I was pretty convinced this product is reality once I saw a pre-sell on eBay.

Am I happy to see the Stadium Club name return? Yes. Am I happy what the set is now? NO.

Stadium Club is supposed to be the kid friendly set with good photography and lots of inserts. What ever happened to Triumvirate Luminous and Ring Leaders? If 2008 Stadium Club doesn't have any regular inserts, that will be a shame.

The product is scheduled for a November 3 release.
Posted by Andrew Harner at 8:25 AM