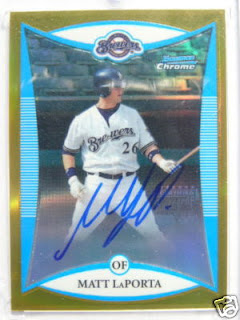 In what is the first of what is expected to be a flurry of trades this season, C.C. Sabathia has been dealt from Cleveland to Milwaukee in exchange for Matt LaPorta, Zach Johnson, Rob Bryson and a player to be named later.

The trade is eerily similar to the deal Cleveland made in 2002 when it sent then-ace Bartolo Colon to the Montreal Expos in exchange for Grady Sizemore, Cliff Lee, Brandon Phillips and Lee Stevens. The Tribe is hoping this group of Milwaukee prospects will enjoy the same success as the ones from the Montreal system did.

As for Sabathia and his new team, the future is now as the trade secures the fact that the Brewers are going for it all right now rather than waiting. At the same time, the trade could possibly give the Brewers a good chance to reload after winning.

The offensive core of the team will still be around after this season, but it's almost a certainty that Sabathia will not resign with Milwaukee and Ben Sheets' future with the team is also uncertain. If both these pitcher walk out of town at the end of the year, the Brewers will five of the top 35 picks in the June 2009 MLB Draft.

So what does this deal have to do with card market? Because Milwaukee is making a strong push to the playoffs (it is rumored they aren't done making trades yet), Sabathia will get a shot at redemption after last year's playoff mess. With as powerful of an offense Milwaukee has, even a slightly below average start from Sabathia in October could be the difference in winning or losing. Because a slightly below average start from Sabathia is better than an average start from Brewers current number five starter Seth McClung. If the Brewers advance far into the playoffs, expect Sabathia rookies, Brewers relics and Brewers autograph to see a dramatic increase in value while all his other cards will see a smaller spike.

The trade has shown in the card market already even though it was officially announced about 45 minutes before this post. In the past thirty days, searches for "C.C. Sabathia" and CC Sabathia" generated just 235 listings while current searches for the two produce 270 items. Many of these are 1999 rookies. The most significant of that bunch is the 1999 Topps Traded Autograph.

As I mentioned, the Indians have a knack for trading aces for good players. LaPorta is already projected to be a superstar so his cards are already priced very highly. Indians fans aren't used to having to shell out $50-$200 for the best autographs of the new guy in town, but that is the price LaPorta is currently generating. Jackson and Bryson are both pitching prospects but it is Bryson who is expected to make the bigger splash in the majors. Bryson has no cards as of yet and you're not likely to find much for Jackson despite his listings increase by 150% since the trade was made. They rose from six to 18.

This trade is one that may have lasting impact on several, if not all, of the player's involved. With a chance in Cleveland, Sizemore's Bowman autograph rookie has skyrocketed in value. Lee is having himself one of the best season's for a pitcher in recent memory. Will LaPorta do the same thing when he gets the call next season? Only time will tell.
Posted by Andrew Harner at 11:23 AM