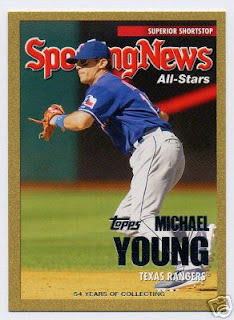 After a 15 inning marathon that started with a 45 minute pregame celebration of Yankees and baseball history, the game ended on a sacrifice fly which will be the most remembered sac fly of the entire season.

Young previously clinched the 2006 All-Star Game for the American League on a two-run, ninth inning triple off Trevor Hoffman in Pittsburgh.

Young is mostly known in the baseball world for these two All-Star moments as well as being named to the team five straight times, but he also has some staggering regular season numbers that maybe you hadn't realized before. Playing in no fewer than 156 games since 2002, Young has posted a career average of .302 with 1,423 hits in 1,152 games and a hit-to-strikeout ratio of 1.89-to-1. Despite all that, he is still one of the most underrated players in all of baseball.

Young is also very under appreciated in the baseball card market as he has just 164 eBay listings and is categorized as a minor star by Beckett. A lot of this comes from the mediocrity that the Texas Rangers has experienced the last several years. And now that the Rangers are finally looking for real, Josh Hamilton and Ian Kinsler are stealing the show. If the Rangers make the playoffs, Young may finally have his chance to at least get his name out there with fans across the nation.
Posted by Andrew Harner at 7:43 AM

Thought it was interesting during the game, the announcers were saying if Texas had any pitching at all, they would be way out in front. Lots of great hitters, no pitching to speak of.