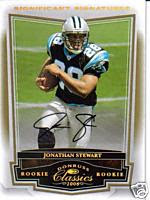 Like always, some people get boxes of new product before the release date, open them and sell the goods on eBay or other auction sites.

Scheduled for release today, 2008 Donruss Classics football will be the same old product that everyone is used to with a few new extras thrown in.

The base set has 100 current NFL stars, 50 rookies, 50 rookie autographs and 50 legends. Inserts include all your favorites like Monday Night Heroes, Membership, Classic Combos, School Colors and Team Colors along with all the serial numbered parallels, autograph parallels and relic parallels you have come to expect from Donruss.

New this year are the Classic Cuts cut signature cards numbered to 50 or less with most being under 25. Included in the set are Tom Landry /10, Jim Thrope /1, Otto Graham /15, Walter Payton /34 and eight others numbered to eight or less. There are 31 total cards in this set.

However, collectors are really excited for Classics because it is the first release to feature the 2008 rookie class in their NFL uniforms. Sure releases like Rookie Progression and Playoff Prestige have draft information, but collector's still feel so much more attached to their player if he's in his NFL colors.

Early going rates on boxes is between $70 and $85 with a presell two box lot going for $127. This is opposed to a 2007 Donruss Classics hobby box which sold for $73 on June 29th so don't expect the going price on the 2008 product do drop too much as time goes along.
Posted by Andrew Harner at 6:38 AM