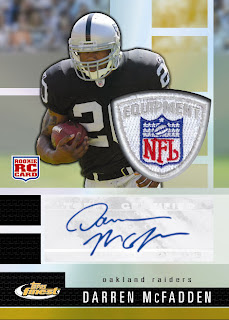 Come September, NFL rookie collectors and Finest fanatics across the country will have a new set to drool over: 2008 Topps Finest Refractor Rookie Autograph/NFL Shield Patches.

The set, featuring 34 of the top rookies from the 2008 Draft (checklist below), will be numbered to 15 and uses sticker autographs.

While I can't believe that these will be player worn patches, considering there is 15 for each player, they still will carry quite the demand because of the autographs and low serial numbering. I have to make this assumption because Topps provided about two sentences about this set, one of which did not discuss whether the patches or player worn or not.

Here is the checklist for the set:

McFadden is obviously the early draw followed by Ryan, Stewart, Flacco, Brohm and Mendenhall. I think it is interesting to note that Topps included Patriots quarterback Kevin O'Connell perhaps hoping he will end up just like Tom Brady in six or seven years.
Posted by Andrew Harner at 7:38 AM