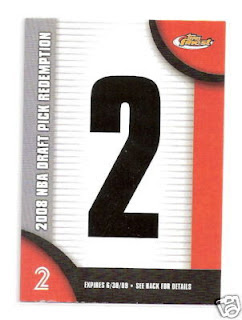 One of the most anticipated features of Topps Finest basketball each year is the Rookie Redemption cards of all the first round draft picks. This year, the set fell one day before the draft so collectors didn't have play very much of a waiting game to figure out which rookie player they would receive.

With the summer league starting two days ago with the top two draft picks facing off, Michael Beasley showed that he belongs in the league. That is, if you consider his 28 points against the likes of other rookies and young players proving he belongs. Sure he had a good game, but can we really judge a player until he goes against seasoned veterans? Derrick Rose had a horrible game that causing more turnovers than rebounds he grabbed.

Beasley proved he was a rookie yesterday though as he was one for 13 from the field with a total of just nine points. Here's what he had to say about the performance.

“You can’t have a great game every night,” Beasley said. “But that wasn’t a bad game, though. We still won.”

This again proves his rookie status. The summer league isn't in place for wins and losses, it's in place for development. Ask anyone while from now what happened in the second Heat summer league game and people will more often say Beasley did terrible rather than the Heat won.

Nevertheless, Beasley probably will be a force in the NBA in a few years so you may want to jump on his rookies now even though they will be through the roof for a guy who has never played an NBA game. Even though the basketball card market is hurting as a whole, key rookie cards and rookie autographs are still some of the best sellers on the market. All variations of Beasley's redemption card are selling between $20 and $40 with the exception of one Refractor version that sold for $61.
Posted by Andrew Harner at 7:10 AM