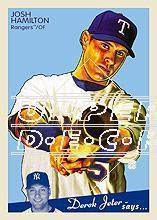 The set, introduced originally in 1933 and by Upper Deck in 2007, Goudey is expected to be one of Upper Deck's most popular mid-end releases. With a 200 card base set followed by 130 short prints (30 legends, 20 presidents, 20 1936 style black and white and 60 Sports Royalty) to chase, a large relic set (one per box) and a large autograph set (one per box), Goudey gives all types of collectors a little something to chase.

For high end collectors, there are cut signature cards, original buyback cards and Sports Royalty autographs. The latter two fall one per case.

The Sports Royalty autographs might cause a little controversy, however. The checklist includes many athletes from other sports like Amanda Beard, John Force and Tom Brady. The list of baseball players is far shorter than the list of non-baseball stars.

Additionally collectors can pursue Berk Ross inserts and the next installment of the Yankee Stadium Legacy collection.
Posted by Andrew Harner at 7:39 AM