The good and bad from Topps Triple Threads baseball

Once Topps Triple Threads was released for the first time in 2006, it has become one of the best selling products in the history of sports cards.

It's very rare to find a product anymore that will continue selling at this level two years after the first release, but will the 2008 version of the set be able to get this trend up? The set is true to its roots for the most part but there is one card on eBay that will have serious collectors of Triple Threads up in arms. 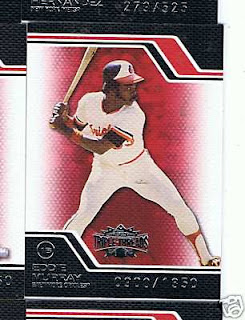 I've always wondered what the purpose of the Triple Threads base cards are other than to take up space in the packs so collector's aren't paying almost $200 for a card or two. Does anyone actually try to build this set? Even stranger is the fact that such a high-end product like this was poisoned with numerous base set parallels. They are all colored coordinated and serial-numbered so it's easier than some other sets, but I don't think collectors are too interested in trying to figure out what their base cards are after they finally figure out exactly what relics and autographs they got are. 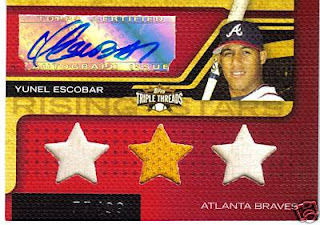 The hits in Triple Threads are the same as always: at least three swatches with the chance of hitting something really nice such as a quad autograph/relic or 20+ piece relic cards. For the past two years, even the most common hits in the products would sell in the $10-$20 range when the product released before settling around the $5-$10 level. Of course, that doesn't help any collector's justification for spending $150+ on a box that yielded no superstar hit. 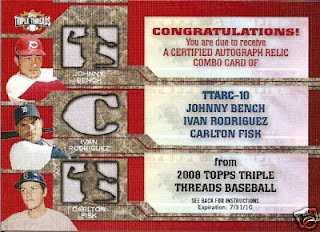 Prior to this year's release, all cards were inserted as is into boxes. However, during a scan of the 11 pages of "2008 Triple Threads" results this morning, I discovered that redemption cards aren't foreign to even the highest of high end products anymore. A triple relic/autograph card of Johnny Bench, Ivan Rodriguez and Carlton Fisk. The winner of this auction might want to send that card in very soon because it may take Topps until the 2010 expiration date to actually make good on the redemption.

The product also includes presidential cards which will just thrill some collectors who pull one of those instead of a triple relic/autograph of Derek Jeter that they were hoping for.

So based on my experiences, I assume this is a good product for high-end collectors, but I think the fact that there is redemption cards within will hurt reviews. They may hurt sales a small bit, but I don't see it being enough to show. However, if this becomes a habit for high-end products like it has with lower end products like Bowman and Co-Signers, Topps may find itself in some big trouble with collectors.
Posted by Andrew Harner at 7:33 AM