Why these cards are bad for the hobby 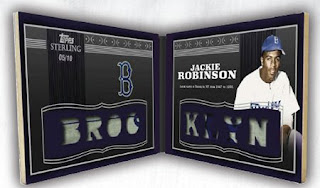 We've all come to expect that card companies try to outdo each other on a regular basis when it comes to the number or size of jersey swatches, uniqueness of patches or number of autographs squeezed onto one card. Like I said, we all know this. But, have you ever took a second to think about how some of these cards are actually hurting the hobby's long-term future while helping its current state?

With the recent first look into Topps Sterling, I made a realization that I hadn't thought about before...certain cards in this set are going to cause this hobby and potentially baseball history a lot of problems several years down the road.

How do I figure this you ask. It's simple really.

Think about guys like Ty Cobb, Honus Wagner and Walter Johnson who played over 100 years ago and even players such as Babe Ruth, Lou Gehirg and Joe Dimaggio who played in the 1920s and 1930s. How many uniforms and bats did those guys go through in a season? Far less than today's players do. Furthermore, how many of those uniforms and bats have survived all those years? Far less than today's players relics will. Do you see where I'm going with this? 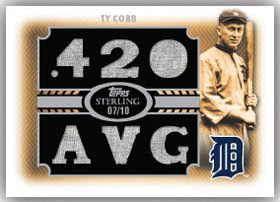 So with a limited supply of bats and uniforms of the older players, why does Topps find it necessary to put six pieces (or what is the equivalent of six pieces) of Ty Cobb's jersey on one card? Instead, I think Topps should've taken some those 60 jersey pieces and made some cut signature/jersey cards and then created a low numbered single swatch set. By doing that, Topps would only have used 20 or so of the 60 pieces allowing them to create 40 more Cobb jersey cards in the future which will prolong the life of the limited supply of Cobb jersey pieces. 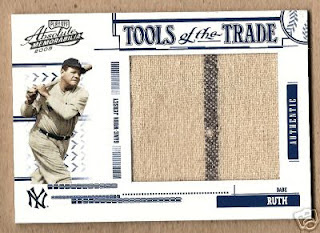 How about the damage Donruss/Playoff did when they were still producing baseball cards? Let's take a trip back to 2005 Absolute Memorabilia. A key set that year was the Tools of the Trade jumbo swatch cards of Hall of Famers. One of those Hall of Famers was Babe Ruth, who, like Cobb, has a limited supply of jersey pieces left. Nevertheless, Donruss decided to make 95 Ruth jumbo swatch cards using what could probably have been over 400 regular size swatches. It is believed that the Mystery Home Runs eight-piece jersey card featured on Mario's blog is also of Babe Ruth, which makes another 70 wasted jersey pieces. 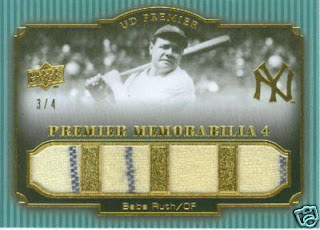 Don't think that you're out of the clear Upper Deck. Most collector's know about those quad jersey cards in UD Premier. Despite the fact that only 16 pieces were used for the four of these Ruth's, are they really necessary? 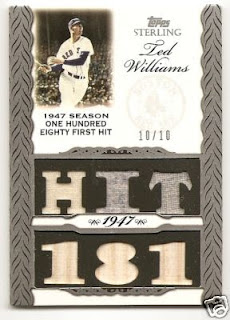 There are some instances where companies did try to conserve the materials somewhat, however, these cards could still be scaled down more. An example of this is the 2007 Topps Sterling Ted Williams card pictured above. Rather than using six pieces of jersey or six pieces of bat, Topps chose to use three of each. That still could be reduced to a bat piece, jersey piece and cut signature combo card or simply a bat/jersey dual materials card conserving several pieces of precious baseball history.

Perhaps the worst of them all is the eight-piece Jackie Robinson that is shown on at the very top of this letter. That card absolutely sickens me. Sure, it is a nice card; all of these are nice cards, but are they necessary? They certainly are not. What is going to happen when are grand kids are our age? The supply of these bats and jerseys is likely to be dried up by then so they won't be able to have the thrill of trying to pull a relic of a key player of baseball history. They'll have to settle for Griffey and Jeter cards instead.

The sad part is that we don't have anyone but ourselves to blame for this growing problem. What started as the simple idea of putting game used material into cards has created many hobby monsters (namely collectors who only go out collecting game-used and autographs) that refuse to buy low- to mid-end products because they don't have enough or high enough quality relic cards. Seeing what collectors want, the companies decide to please them by producing bigger and better relic cards without realizing that their supply will soon run out. 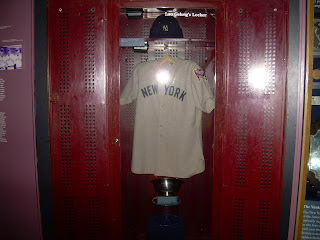 Are we soon going to hear a story about Upper Deck calling up the baseball Hall of Fame and asking for this Lou Gehrig jersey to cut into pieces? Can the demands of collectors once the supply runs out run companies into this type of desperation? I certainly hope not, but at the same time, I wouldn't put it past any of the companies. 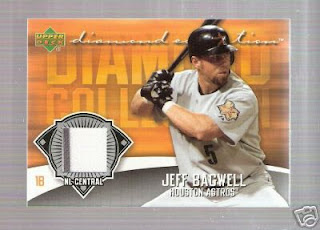 I always laugh when I see a current player with a minuscule jersey swatch on a card. Why are we conserving the jerseys of player's who have hundreds of them available? Why don't you conserve the actual pieces of history that are you ruthlessly cutting up in staggering numbers by using just one swatch per card?

I will leave you with this, I am not one of your customers who buys high end products like Topps Sterling or UD Premier, but that doesn't discount me as a concerned collector. I can afford to buy SP Legendary Cuts if I wanted to and I would like a chance at pulling a jersey card of one these older Hall of Famers a few years down the road when I am living on a college budget.

So, please. I am asking that you start trying to conserve these precious materials we have so few of.

You make an excellent point and I agree that at some point the supply of relics from these legends will run out. The only positive aspect of this is that it will make the relic cards that do exist even more valuable. So the relic cards of Babe Ruth, Ty Cobb, Jackie Robinson, etc might be really good investments to make today.

The problem is being able to afford those pieces for investment. At the same time, I think it will take a long time for these to appreciate enough value to make it a worthwhile investment. Because there are so many out there already, the prices have dropped significantly since the first few of these relics.

As more and more of these cards enter the market, the values will probably drop even more. That being said, it will be years and years before these cards gain any significant value.