I wonder if AngryChris is around? 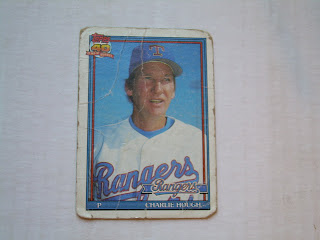 I don't even like the Rangers really, but this was one of my favorite cards as a child

Because if he is, he may want to stray away from this post after what he had to say to Treasure Never Buried's author.

Despite being 20 years old and growing up in the middle of a revolutionary change in the card business, I still hold true to my original old school roots. At the end of last week, I remembered why.

My collection has grown large since I began back in 1991 and I have finally decided to start to try and move some of my commons out of this room. For those wondering why, it is because I have over 40,000 commons directly to my right. Before the end of last week, all the cards I had prior to the flea market pick-up were stashed in 800 or 1,600 count boxes under a table.

Well, I decided that I would have more room in here and be able to access them better if I put them into 3,200 and 5,000 count monster boxes and stacked them as high as they would go. My assumption was correct and had prompted me to even reorganize some more stuff to maximize space. But, none of that really matters to this story.

What does matter is that I found my box of my original cards: 1991 Topps.

While I don't remember getting these cards, I do know that they were bought while in Tennessee visiting some family, a trip I vaguely remember. I don't know how many packs I got or how much they cost, but I know they got manhandled while I was a child. There weren't manhandled by my bicycle, rather by me sitting in the living room reorganizing them on a regular basis and carelessly being out back into the blue tub.

These cards meant the world to me. They helped me learn, they kept me occupied and now, they give me a fond memory. Sure they all have severely rounded corners and have my initial on the back, but who cares? It's not like I plan on selling them anyway.

I did all the bad things you can do to cards. I bent them, I would eat and drink while messing around with them, I threw them around and I didn't handle them gently at all. If one got ripped a little, you taped it back together. Today, you throw it away. 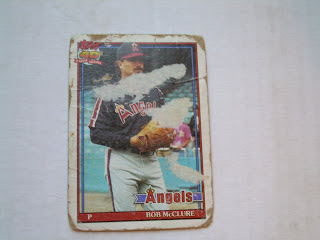 Got milk? I assume I did while looking at this card one day.

There are so many other good memories that go along with my early collection. Does anyone remember the old Hostess baseball cupcakes with the baseball cards? How about the old Post cereal cards? I had (and destroyed) my fair share of those promotional cards back in the day as well. Don't believe...check it out. 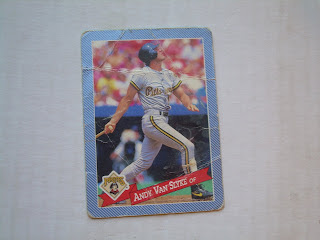 Then there was meeting Jim Thome at my dad's dealership. I can't say that that card is in particularly good shape anymore, but it will forever be my favorite card even though Thome bolted from the town he said to have loved so much.

There's the rack packs of 1990 Donruss from Big Lots.

Getting 600 random baseball cards from one of those novelty magazines for my birthday from my grandparents.

The 1993 Topps Series Two box I bought for $10 with money my grandma gave me for getting good grades in school.

Mistakenly buying 1993 Ultra packs from K-Mart thinking they were just $1.99 when they turned out to $4 each.

Thinking that one of those random card mix boxes they sold at stores that included Sportsflics 2000 cards was going to be the greatest thing ever.

The 1996 Bazooka cards my dad would bring home after going to an auto tech class in Detroit or Cincinnati or wherever else it may have taken him.

The first card show in 1997 where I bought a 1997 EX-2000 Nomar Garciaparra card for $1 only because the seller's helper mislabeled the prices on the boxes. Boy has that show fizzled out over the years.

Pulling a 1998 Topps Mike Piazza Mystery Finest Refractor from a regular pack on a Sunday morning after checking out the box scores in the paper at the News Center.

Around the time of that last memory is when the card market changed and so did my habits. I became a set builder and started to care how my cards looked. Then came 2003 or so when Beckett Buy/Sell/Trade was still in service and I began to sell and trade with collector's around the country. Now, I have to admit, I have become a fan of the business aspect of this hobby, but I still dearly hold these memories and the PCs that I still build to this day. Those cards are worth far more than any amount of money I will ever make from selling any one or 1,000 cards.

It's important for all collector's to have memories like this. This is a hobby. Sadly, for many young collectors today, the memories are pulling an Adrian Peterson patch card or an Upper Deck quad autograph. The original preface of card collecting is slowly being lost as not too many youngsters are trading with their friends in the tree house or on the playground, they are trading with adults from 2,000 miles away who they will never meet.

I will take my memories of sitting in the living sorting my cards every which way just because I could.

So AngryChris, if you're reading, I hope you enjoyed, and I'm sure you can also appreciate what I did with my old Donruss puzzles today as well.

Everyone, enjoy the hobby for what it is: a hobby. I know there are some people out there who strictly do this as a business and that is alright. Chances are they never got into to it for the hobby side in the first place. But for those who are more worried about how many autographs and relics come in that box, maybe you should step back and try out set building. And when you're done, put them in pages and slowly look at them. Read the backs. Look at the stats. Maybe you'll find a fun cartoon on the back. Maybe you'll see that the player's picture is unique or humorous in some way. It only takes 30 minutes of your day.
Posted by Andrew Harner at 3:29 PM

You’ve brought back a lot of memories to me from your articles !! As a child I used to sit on our living room floor and sort cards for hours and make up all sorts of games to play when my friends were not around. Growing up in a very small town there was only one small variety store that sold sports cards. Baseball in spring and football in fall. My friends and I collected mostly baseball and traded cards all the time. We would save every penny until we could buy some of those 5 - cent packs !! Once in a long while we would actually have enough to buy a whole box . That was a real treat !! There were no game-used or autographs but we got just as excited over any Cleveland Indians card we pulled. ( I grew up and still live in the same little town, about 50 miles SW of Cleveland ) 50+ years ago I got my first cards. As I grew older I strayed from baseball in light of the “ muscle cars of the 60’s and 70’s “ . Then after sowing my wild oats and getting married in the 80’s my interests changed and gravitated back to days of my youth.I'm sure the two sons we had , had something to do with that. We never had a lot of money but we enjoyed a lot of good times together. We began collecting cards in the early 90’s and have never stopped. Now I read my youngest son’s words and realize his Mother and I must have done something right ! We are very proud of both of our sons , this blog’s author being the youngest…… BASEBALLDAD