Card of the Day: 2008 Topps Allen and Ginter Kosuke Fukudome 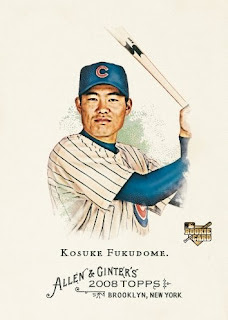 It appears that Topps finally has figured out that collectors desire Kosuke Fukudome rookie cards that are legitimate. However, the first one released will be similar to the 2008 Topps Series Two gimmick card.

Because of what I believe to be the lingering effects of a contract issue, Fukudome was added at the last minute to Allen & Ginter which hits shelves on July 23. The card was announced to be produced, but in very limited quantities. Despite that, I don't believe Topps was trying to produce a new gimmick. Assuming there was a contract dispute, they probably didn't have the time to produce a full run of Fukudomes. Nevertheless, I can hear all the ranting now about another short printed Fukudome rookie from Topps.

Cubs fans will be happy when August 13 comes though as that is the scheduled date for the first actual Fukudome rookie card produced by Topps. Bowman Chrome, the Home of the Rookie Card, ironically will have the first Topps Fukudome rookie. After that, Fukudome will be released in every Topps or Bowman product for the rest of the year (at least in products he would qualify for).

Finally, Topps also announced that they are adding Fukudome as a hobby-exclusive bonus in all 2008 Topps factory sets. I love how they always correct their mistakes in the factory sets that can't be as popular as the regular boxes sold in stores.

One small problem with that though. The sell sheet for the factory sets already included the ten rookies that would be featured in the hobby-exclusive rookie set. So do they plan on removing one of them or will they include Fukudome as card 11? Time will tell as they say.
Posted by Andrew Harner at 9:29 AM

As for the A&G, if this isn't a base set card (preferably not short-printed) I will personally lead the mob down of collectors down Whitehall Lane.

Could it possibly fall under the same category as when Upper Deck produced all those WBC cards of the Oriental players? I would imagine they didn't sign all those players to contracts? Perhaps their MLB and MLBPA license allows them to produce WBC cards of anyone?

Upper Deck had the WBC contract, not Topps. But that still would prevent Topps from showing a player in his national team jersey.

Unlike Upper Deck, Topps still signs all their players to individual contracts. Topps had to have signed Fukudome to a contract, or else they wouldn't have been able to feature him on the Japan card.