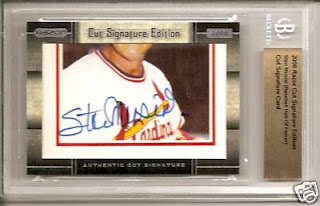 While the baseball prospect cards being put out by Razor look a whole lot sharper than any Bowman release ever, Razor's dive into cut signature cards are not making nearly as much of an impact as the prospect cards.

Razor now has several prospects, including the overall number one pick Tim Beckham, signed to exclusive contracts, which prevents Topps from including them in Bowman Draft. That is all fine and dandy, espcially considering how good the National Sports Card Convention promos look.

However, Razor Cut Signature Edition was an $89 mistake for any collector who bought a box. Each box included one card, a cut signature, that is slabbed and encased BGS holder. While an all Beckett slabbed set is already not a smart idea, that is not the biggest problems with these cards.

First off, Razor has produced cut signatures of living people. How much can a Paris Hilton cut signature be worth when, if you're lucky, you can get one on the side of the street for free? The whole purpose of cut signature cards is so collector's can get autographs of deceased legends who are no longer available to sign.

Secondly, Razor has produced some of those ugly cards where the cut signature isn't on a canceled check or plain white paper. Take the Musial pictured above. Wouldn't you rather just have the original card Musial signed instead of this slabbed cut signature? Any cut signature card that utilizes a signature off of something that has a picture should be shunned to an attic in a desolate area only to be found long after my lifetime has passed. Just give me the original because once you put it into something else, I want to see the rest of the picture.

This product makes me wonder if Razor should have remained in the poker card business instead of jumping into the world of baseball prospects. While the initial images of Razor prospect cards looks good, it's hard to say what else Razor may come up with for these youngsters. Are there going to be limited edition Tim Beckham cut signatures instead of limited edition Tim Beckham hard-signed cards? Time will tell on how they decide to do autographs, but I sure hope they decide to go with hard signed cards rather than cut up 8X10 photos.
Posted by Andrew Harner at 5:03 PM

Yuck! And the connection to Beckett's grading service hurts Razor's credibility even more!

If the Musial card is a true example, then they are not graded. They are just in the protective slab.

Still ugly and stupid however

That's what I get for not proofreading myself. I noticed after I wrote the post and then never went back and removed the parts where I said graded.