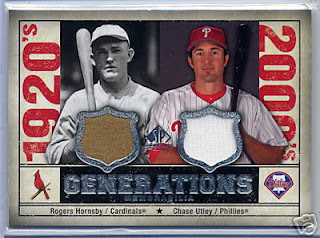 As I reported earlier this week, Upper Deck is being sued by Topps for the use of images of players that Topps has signed under exclusive contracts.

I got word last night from Hand Collated that Upper Deck may be off the hook because they were not using images of the players named in the lawsuit. However, that obviously is not the case.

According to the author over there, a message board member explained that as long as Upper Deck does not use likeness, it will be the same situation as when In The Game released Wayne Gretzky cards despite not having his contract.

However, another interesting aspect to this is that Topps has released Daisuke Matzusaka memorabilia cards despite his exclusive relic and autograph deal with Upper Deck.

It will be interesting to see if this gets brought up by Upper Deck if this case reaches court. I'm not going to sit here and pretend to act like I know how court cases work, but I would have to think that this would be a strong key to Upper Deck's case.

At the same time, I don't see how both these companies could make such obvious mistakes. Did Upper Deck really think Topps wouldn't eventually notice the cards they were producing? And how about Topps promoting an Upper Deck exclusive in its main advertising for its highest end product Triple Threads?

It just doesn't make sense to me everyone.

I think this case is far from over because of cards like the ones I mentioned. As always, I'll keep you up to on any new word I get.
Posted by Andrew Harner at 8:31 AM

I've found a couple links that state that the Upper Deck/Dice K deal covers auto cards only, not memorabilia cards, and I can't find Matzusaka autos in a Topps release so far.

You are welcome to prove me wrong again, though.

Only because you asked...

CARLSBAD, Calif., Aug. 15 /PRNewswire/ -- Daisuke Matsuzaka has made quite an impression on big league batters, most not wanting to stand in the box and face his full array of pitches, much like the competition in the collectibles category where Upper Deck reigns supreme. That is why the pairing of Daisuke and Upper Deck was fitting. The front runner for American League Rookie of the Year has agreed to an exclusive autograph and memorabilia deal with the market leader in sports cards and memorabilia, Upper Deck.

There was one Topps Daisuke relic card (2007 Triple Threads) that was released prior to this announcement. Other relics, Bowman's Best and Topps Sterling, were released after this agreement was made.

I saw that, too, actually, but took memorabilia to mean things like signed balls and caps that you buy in the Upper Deck store, and not memorabilia cards themselves.

The other answer would be that these cards were grandfathered into the Dice-K deal somehow.

Honestly, without seeing any of the deals signed, there's no way to know for sure. And I doubt Topps or upper Deck will turn that over to two curious bloggers looking for answers.