Card of the Day: 2008 UD Piece of History Grady Sizemore 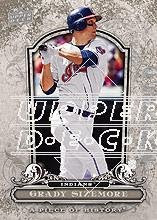 On Wednesday, Upper Deck is scheduled to release 2008 UD Piece of History.

This is the first release of the brand since its first annd only past release in 2002. However, the 2008 version is more in depth than its precedent.

The 200 card base set will include 100 regular current stars, 50 rookies and 50 historical moments. There will be 18 insert and parallel sets, six autograph sets, and 15 relic sets.

Each 16 pack box should contain one autograph and three relic cards. Packs contain eight cards, and boxes will sell for around $70 each.

The best relics to chase from Piece of History are two button relic sets that are numbered to five and Yankee Stadium Legacy rleic cards fall one per 20-box case. For autograph hounds, there are rookie autographs and four autographed relic sets.
Posted by Andrew Harner at 6:37 AM