Card of the Day: 1998 Leaf Rookies and Stars Ruben Mateo 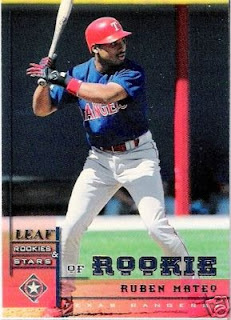 Do you ever take an old Beckett you have saved for whatever reason and looked at the top cards from that time?

I was flipping through the May 1999 issue with Roger Clemens on the cover and there was some names for the ages listed in there.

Let's start with the 1998 Leaf Rookies and Stars set which was basically the beginning of short printed rookie cards in baseball.

Here were the top rookie cards from that set back in May 1999:

And the top cards from the set today:

It's funny how the times change. I think we all remember back when J.D. Drew was the next best thing to nobody. According to this issue of Beckett, 1999 Drew cards were in the $8-$12 range.

But the reason I bring up Mateo's name is because he was featured in the May 1999 Beckett on page 73 as the month's One To Watch calling him a "legitimate five-tooler" and saying he "is expected to contribute heartily to the Rangers' big-league club before the end of the 1999 season."

Well, Beckett is allowed to mess up every now and then. Of course, a lot of collectors messed up to since you can pick up today's Card of the Day for just $1 on eBay right now.

While I am at it, here are some other noteworthy valued cards from May 1999.

And just to leave everyone with a bad taste in their mouth, you could pick up a David Ortiz Ultra rookie card ($2) for less than Ricky Ledee ($3) and Jose Cruz Jr. ($4).

But, if you think that is bad, please stop reading for the sake of your computer's screen...

A 1997 Donruss Signature Autograph of David Ortiz was a measly $12.

What is you worst collecting investment/purchase? Mine was probably getting into Adam Piatt cards back in 1999. Or maybe selling my Ortiz Ultra rookie for $12 before the 2004 World Series.
Posted by Andrew Harner at 12:44 PM