Female to be featured in Ring Kings 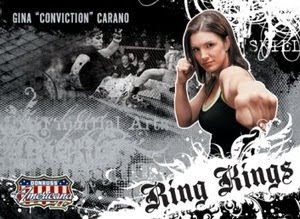 Donruss Americana was one of the most successful products released in 2007 even though it really had nothing to do with sports.

The set featured all sorts of personalities and was driven by a Mike Huckabee autograph card, will be released in 2008 in July with Donruss Americana II.

One of the most anticipated inserts from that release is Ring Kings MMA which will feature the top fighters in mixed martial arts.

One such fighter is Gina Carano who is 6-0 so far in EliteXC this season.

Carano is the daughter of former Dallas Cowboy Glenn Carano and also works on American Gladiators as Crush.

This cards is likely to be the only female card in the set and will most likely command some of the highest coin from the entire Ring Kings set.
Posted by Andrew Harner at 8:28 PM