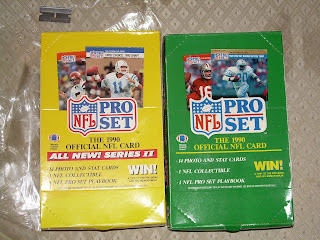 In a box break that would make John of Old School Box Breaks proud, I busted a box of 1990 Pro Set Series One and Series Two that I acquired through a community yard sale.

In a break older than all but one post on the aforementioned site, I knew I wasn't going to find anything great.

I mostly got these boxes for the thrill of opening packs and finding some cards that would fit into some of niche collections (ok so what if my only niche football collection is cards where its snowing).

However, there was a rookie in 1990 by the name of Emmitt Smith and his card was the one card I was aiming to get from Series Two.

As I went thorough the Series One box, I discovered that this box was no exception to one of the old characteristics of old boxes: you get a lot of duplicates and sometimes get packs that have almost exactly the same cards in them. I haven't counted up or sorted through the base cards so I don't know if I got extra cards or a ridiculous number of duplicates yet.

Every pack was supposed to have 14 cards, one NFL Collectible and one NFL Playbook contest scratch-off card. All of the scratch offs in Series were worth one point without an instant win. The Series Twos would not scratch off so I probably have an instant winner in there. Too bad they expired in 1992.

The Series Two packs were formatted the same way, but I did count up a few packs that had 18 total cards in them, which is another one of things you can count on an old box to deliver. The NFL Collectibles in those packs were paintings of Super Bowl MVPs and are some really nice cards for 1990 standards.

But, pack after pack, I was coming up empty on Smith's rookie. Finally, I reached the very last pack in the box, but through the first 12 cards, it wasn't looking good for me. However, a Smith popped its head out as the second to last card of the entire two box break so I suppose it was worth it. 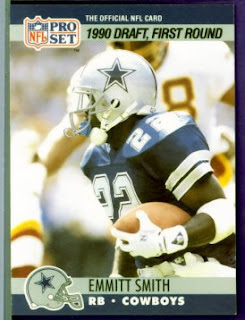 I never thought I would get such suspense out of a 1990 box of cards!
Posted by Andrew Harner at 1:13 PM

Haha, nice break! And thanks for the plug!

I figure dit would make you proud!

Hey I was just wondering if you know of any error cards that you pulled from either of those boxes. In series 1 there's quite a few. Most of them aren't worth a damn thing but I'm asking because I'm trying to build that set. Let me know. Thanks