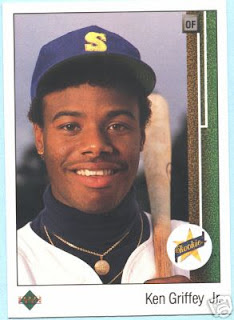 Heralded as perhaps the most recognizable card of over-production era, the 1989 Upper Deck Ken Griffey Jr. rookie is finding a new slew of buyers 20 years after its release.

Last night, Griffey entered his name next to Hank Aaron, Babe Ruth and Willie Mays as well as Barry Bonds and Sammy Sosa, but he will be mostly remembered for being in history with the first three names because of the steroid controversy surrounding the last two.

Mark Henderickson was already somewhat well-known because of his switch from basketball to baseball and his remarkable height on the baseball diamond, but he will now be linked to Griffey forever after serving up Griffey's 600th career home run.

The already hobby-popular Griffey has seen an increase in demand over the course of his pursuit of 600.

The Upper Deck rookie is now selling for around $30 ungraded and as much as $300 in gem mint condition.

Griffey is bound to be popular in the hobby even after his retirement, but if you are just starting a Griffey collection, you have quite the task in front of you as there are tens if not hundreds of thousands of people trying to do the same thing you will be attempting.
Posted by Andrew Harner at 3:59 PM