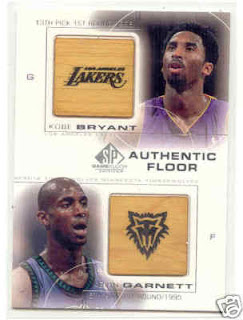 Long before the most anticipated NBA Finals in recent memory, Kobe Bryant and Kevin Garnett were paired on trading cards.

Back in 2000, these two were just establishing themselves as two of the best and brightest stars in the entire league, and Upper Deck was there to capture the moment.

Now that the two are facing each other in the Finals, expect any of the older dual cards of these players to spike in value and demand.

No matter what the result of the Finals, these cards will still be sought after because of the significance these Finals hold.
Posted by Andrew Harner at 12:30 PM