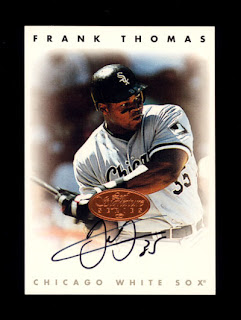 Donruss/Playoff has made several hobby landmarks over the years, but the 1996 Leaf Signature set may be the biggest influence they ever had.

At $9.99 per pack, Leaf Signature Series was also a product mainly geared towards experienced collectors, which caused some controversy when the 50 card extended series was released.

The first 100 cards were released in the middle of the 1996 card release calendar, but an extended 50 card series to the set hit store shelves in January of 1997. This has made some collectors feel that the set should belong in the 1997 category, but all major hobby publications still consider the set to be from 1996.

The real reason people still talk about this set though is because of the 252 card autograph set that was released with the first series (an additional 217 autographs were released in extended series packs).

The brand only stuck under the Leaf tag for one year before becoming Donruss Signature in 1997 and 1998. Those two brands included David Ortiz rookie year autographs in 1997 as well as a base rookie card of J.D. Drew in 1998.

While the original autographs have very limited trade value in today's market, they still will forever be considered one of the most influential releases of all-time.
Posted by Andrew Harner at 12:33 PM

I enjoyed reading your article here and in reading I question one thing.

How legitimate do you believe these autograph insert cards are? I find it hard to believe that these players have the time to sign upwards of 4,000 cards.

Let me know what you think, or if you have any information that would debunk my theory.