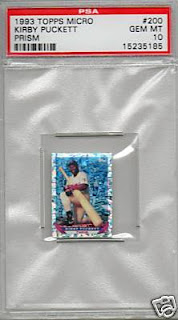 It's not often that I feature a graded card as the Card of the Day, but in order to show the size of Topps Micro cards, I really didn't have a choice.

Topps Micro was a three year factory set only parallel series that ran from 1991 to 1993. The catch was that these cards measured just 1" by 1 3/8" which is about 40 percent of normal size.

In 1992, there were 12 gold cards that were numbered G1-G12 and were included in every Micro factory set. Stars included Nolan Ryan, Ken Griffey Jr., and Don Mattingly.

The 1993 set featured 12 Prism inserts which were numbered the same as the regular cards. Stars in that small set were Nolan Ryan, Ken Griffey Jr., Kirby Puckett and George Brett.

It is too bad that these cards never caught on because they did make unique collectibles. They aren't worth as much as their full sized counterparts so if you ever find any of the complete sets, you should be able to get them for a good price.

Check back tomorrow to see one of Topps' bigger sets.
Posted by Andrew Harner at 2:04 PM