We all know that sports card photographers sometimes catch players in unique situations.

Well, some football card photographers in 1994 captured some images that can be combined to make an interesting back story.

It all started on on July 4, 1993 as Louis Oliver of the Dolphins, Al Smith of the Oilers, and Ryan McNeil of the Lions got together with players on the Los Angeles Rams, Kansas City Chiefs and some of the NFL's officiating crew for a barbecue.

As the 15 or so people gathered around a large table in Oliver's backyard, the players enjoyed ribs, steak, burgers, hot dogs and more, but a conversation started about the 1994 season is the big thing everyone reading along needs to remember.

"I can't wait until we play you guys," McNeil said to his former college teammate and now Rams backup corner Robert Bailey. "I always love playing against you all. Say, maybe you'll get in the game this year?"

"Yeah, and I just can't wait to play those Chiefs," Oliver said in a very sarcastic voice for all to hear.

"Those wide outs can't stand a chance against me and my boys. Ain't that right Hassan?"

The Hassan was veteran Chiefs receiver Hassan Jones, and he blew off Oliver's comment as did the rest of the players who were there because it was well known throughout the league that Oliver never backed up anything he said.

"I can't believe that any of you actually want to play anyone," Smith said. "I can't stand going anywhere anymore with the quality of officiating we have anymore. You all saw what happened down in Pittsburgh last year."

(For those who aren't experts of that situation, here is a sample) 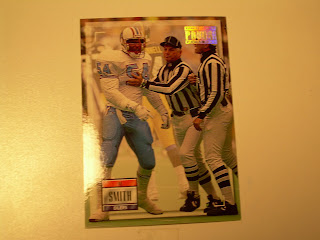 And that was the end of all football talk for the day because no one wanted any fights to break out, but of course, this was something that everyone involved in remembered.

The season was going great for everyone involved with the barbecue until Week 8 rolled around and the Lions and Rams played.

Before the game, McNeil and Bailey were catching up and of course talked about McNeil's hope from the barbecue that Bailey would play.

Sadly, the two counterparts didn't get more then a friendly gesture before the coin toss that was forever captured by an Upper Deck photographer. 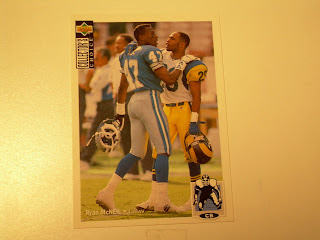 However, at least these two will get invited back to Oliver's barbecue next year.

The very next week, Oliver's Dolphins were taking on the same Chiefs he taunted back on July 4th, and Hassan Jones was in the starting line-up.

It didn't take long for the two to meet up on a play.

After gaining a few yards off of a botched tackle by Oliver, Jones simply looked at him and smiled. Then he said "We really can't stand a chance huh?"

The very next opportunity he got, Oliver decided that he wasn't going to stand up to Jones' remark. The end result was captured brilliantly by an Upper Deck photographer. 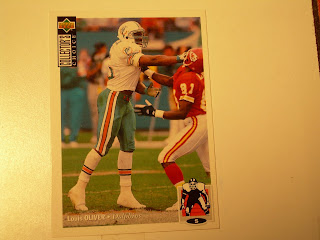 Needless to say, the 1994 July 4 barbecue was without any Chiefs players.

A big thanks to Upper Deck and Pro Set for making this story possible.
Posted by Andrew Harner at 4:06 PM