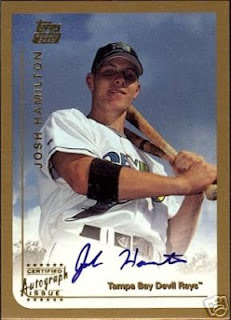 Josh Hamilton has seen it all in life and in the baseball card world.

As a highly touted rookie, his 1999 Topps Traded Autograph card was one of the top sellers before he even stepped foot on a Major League field.

In May of 2000, Beckett priced the card at $80, a price that would prove to be very steep just a few years down the road.

After getting involved with drugs and other things, Hamilton disappeared from the baseball map and by September of 2003, this autograph card could be had for $30. By June of the next year, it had dropped another $5.

After making a return for the Cincinnati Reds in 2007, this card shot up higher than it was when Hamilton was a top prospect.

And 2008 is bringing in better things after a trade to the Rangers, who have a hitter-friendly park by the way.

Still leading all offensive Triple Crown at the time of this post, Hamilton's rookie autograph is one of, if not the hottest, baseball card on the market right now.

Just imagine if Hamilton goes on to win the Triple Crown. People will be in an even bigger frenzy over this card and his other base rookies (which trade in the $10-$25 range at this time).

I know I can't blame myself, but I wish I would've continued investing in Hamilton back in the early 2000s when he disappeared from baseball. I'm sure I echo the thoughts of many, but who really saw this coming?
Posted by Andrew Harner at 11:31 AM