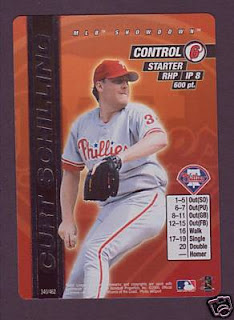 I'm sure many of my readers can remember back when Wizards of the Coast first came out MLB Showdown in 2000.

There were three things you could do with this set.

I personally engaged in the first two choices, but mostly collected the set for the second reason.

My brother and I used to play matches on a fairly regular basis including our own tournaments where we would each make five or six teams and play each other for several games.

We never played after the 2000 set for some reason, and when I look at those newer cards, I sometimes wonder how advanced this game really got.

But, for those who never bothered to play or forget how, here are the basic rules. Each offensive player has an On-Base number and each pitcher has a Control number which are key elements in how the game works.

Each player has a strategy deck which the 50 cards that they can draw from in each game. If I remember correctly, you get to draw a new card each time you play one and between each half inning. You could have up to five of the same card in your deck.

Some of my favorite strategy cards were:

Now why do these cards matter in game play? I suppose I would have to explain how to play the game before you fully understand why these cards are so valuable.

Every card in MLB Showdown has a chart in the lower right corner that is used to determine whether the hitter is out or on base. The categories can include strike out, ground out, fly out, putout, walk, single, single+ (has to with the batter's speed in advanced games), double, triple or home run. When the pitcher has the advantage, which is most of the time, the batter will roll the die and use the pitcher's chart to determine if the batter is out or on base and when the hitter has the advantage they use the hitter's chart to determine that. Generally, pitchers only allowed base runners on rolls of 15 or higher, but some of the best were only rolls of 18, 19 and 20.

For a pitcher to have their full Control number, they only can go the allotted innings listed on the cards unless you use a strategy card bonus. For each inning after the pitcher's maximum that you use him, you lose one Control point on every roll. For every three runs a pitcher lets up, they also lose a point on their control.

In advanced games, there are stolen bases, double plays, outfield assists and many other baseball rules that come into play, but for the most basic game, you follow the above rules.

A team consisted of 20 players and had to fall below the 5,000 point cap; each player in the game has points which are basically like their salary. You had to four starters and eight or nine position players (DH in AL rules only). The rest of your players could be relief pitchers or bench players.

I still have one of my teams in order from when I used to play regularly, and I must say, it was a fantastic team.

Here is my starting National League line-up playing with American League rules along with their point total and On-Base number (some players came from the 2000 Pennant Run Edition):

Obviously, the big name stars were always the guys you wanted to use. Just because they could smash home runs, doesn't mean playing small ball can still be to you advantage. Against a pitcher with a Control number of five and some strategy bonus that takes the On-Base number to 12 gives you six of 20 numbers that give you the advantage. If do you that a few times in a row, you are bound to get some walks and singles that will drive in runs.

Here is my starting rotation from the same team:

Curt Schilling is one of the most valuable cards I own when it comes to game play. Two other extremely valuable pitchers are Pedro Martinez and Randy Johnson. Basically with the pitchers, you want to combine a good Control number with a high number of innings pitched. The only reason Fransworth made this team was because he had a low point total.

The bench in MLB Showdown is where you saved points. Bench players could only play a few innings in a game and only counted for 20% of their point total. Here is the bench for my team with the number of points they took up on my salary.

Jeff Reed from the starting line-up is technically a bench player because the rules state that an NL team can use a bench player as the DH in AL rules.

Relievers were somewhat important to the game, but I still didn't put to much focus on have a stellar bullpen. Here is my bullpen.

The only reason Hoffman is on this team is because when the pitcher has the advantage, the only two rolls that allow a base runner are 19 for a single and 20 for a double.

The total salary for this team is 4950 and I had absolutely no way of making this team better with the cards I own. Combined with my strategy deck, I would take this team and play against the best 2000 MLB Showdown teams that are out there, if only anyone really played this game anymore.

Which I can't say much as I haven't played the game in several years now, but it is nice to look back upon fine memories.
Posted by Andrew Harner at 7:11 AM