Card of the Day: 1996 Collector's Choice You Make The Play Cal Ripken Jr. 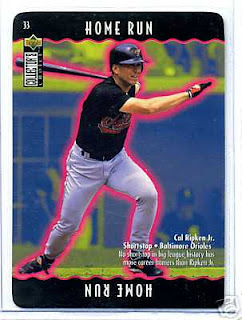 While listing some new cards for The Nickel Bin, I ran across an old Collector's Choice insert card of Tim Salmon.

While I never collected this set or played the game that went along with it, it was a unique insert set for its time. This was one of the first mainstream modern releases that doubled as a game and an insert set.

The cards were inserted one per Series One pack and each of the 45 players had two variations with a different outcome for each one.

The design of the card was almost standard except for the rounded corners and the backgrounds on these cards were very colorful featuring a hot pink outline of the player green and blue splotches in the rest of the background. The cards also give a small fact about each player under their name on the front of the card. The backs have a large You Make the Play logo.

In 1996, dealers who order cases of Collector's Choice Series One received special packs of these cards and any collector could send in ten wrappers and $2 to get a 12-card pack of these.

This set also had a Gold Signature parallel. These also were released in the football Collector's Choice.

But good luck finding these anymore. Sure you can get them on Sportslots, but do you really want to pay that much for these common inserts?

You might be able to find them at a flea market or in some dealer's 10 cent box, but if you ever find a slew of these at a show or shop, please do tell me because that's impressive.
Posted by Andrew Harner at 8:32 AM

Man, I hated these cards but if I ever do find some....they are yours!

I don't necessarily collect them, I am more or less just wondering if anyone can still find them anywhere.