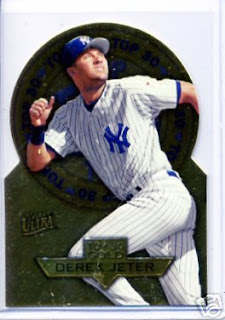 In 1991, Fleer and Topps both released new baseball sets. Topps' was called Stadium Club and Fleer's was called Ultra. By the time the mid-1990s rolled around, these were two of most sought after sets by all collectors.

However, just like Stadium Club, the autograph and relic rush of the early 2000s killed the Ultra brand and turned it into something it was never supposed to be.

If you were a collector from 1991-1999 and wanted insert cards, Ultra was the place you had to go.

The year 2000 saw the beginning of the end for Ultra as they released Feel the Game relic cards. There still was regular inserts released after 2000, but the main focus on Ultra cards became the relic and autographs. In 2007, every insert in Ultra was either a relic or autograph set or had a relic or autograph parallel.

I miss the days of All Rookies, Award Winners, Hitting Machines, On-Base Leaders and Strikeout Kings along with some of the newer sets they made like Kid Gloves, Greatest Hits and Photo Effex. And who can forget the Hot Packs that included all insert cards?

But, what is the first thing you think of when you hear the name Ultra? For me, it's the Gold Medallion base parallel. Sure they did that parallel for many inserts, but you bought a pack of Ultra to get inserts and your one Gold Medallion.

The parallel had many different versions over the year. It all started as a special gold logo in the top corner of cards in 1995, became a gold foil card in 1996 and utilized different pictures than the base cards in 1997 before changing over and over until 2006. The Medallion was dropped in 2007 in favor of the set being called Ultra Gold.

Awhile back, I saw the perfect video to complement this post, but it has apparently been taken down. It was a 13-15 year old kid who just bought a box of 2007 Ultra SE baseball from the hobby store. His video box break lasted just about two minutes because all he did was throw the base cards aside on the table without even looking at them and showed the hits to the camera. It was a sad sight to see.

Check out the differences out in an old box break of Ultra compared with a newer one.

This break is a 1999 Ultra box, one of the last years for "normal" inserts in Ultra. I tried to find an older box from 1995-1997 but I had no luck. I enjoy how this collector shows the Gold Medallions and all the regular inserts that he missed proving that some people did care about these inserts. Listen around 2:05-2:15 and see what this collector says, it is truly a rare statement in today's world.

Notice how the 2007 Ultra SE box gives one hit per pack and just five packs per box. Also notice how the collector knows an autograph is coming in the last pack.

Posted by Andrew Harner at 9:38 AM

I usually agree with most of what you post, but on this one I have to let you know something. 2007 Fleer Ultra is almost exactly the same as 1999. I can still pick up packs at my local hobby for $1.50. They still have 1 gold card per pack, and a few random inserts. The second video you posted with 1 hit per pack, is 2007 Fleer Ultra SE. While it did turn out to be a crap product that you can now get for $35 a box, it is a completely different product from regular 2007 Fleer Ultra.

I actually meant to SE in there. I fixed it now. Thanks for pointing it out.

And when are you ever going to post again??

I've got an enormous post coming soon, that is going to be a giant pain to read, but I can't wait to finish it.

I will also be putting up a small post today. Thanks for checking!!