Card of the Day: 2008 Sportkings At The Movies Cut Signatures Jack Johnson 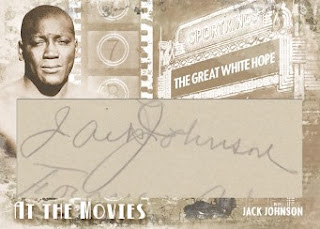 Sportskings was one of the, if not the, best release of the 2007 hobby year. That product was really driven by the first Pete Rose autograph and memorabilia cards ever produced.

2008 Sportskings Series B has its own driving force: cut signatures.

With six different cut signature sets, Sportskings will feature some of the rarest cuts ever to released to the hobby.

Collectors will find cut signatures in the following six sets: Founding Fathers, Presidents and Players, Vintage Papercuts, Sportkings at the Movies, Papercuts and 1933 The Year.

While, I have never been a fan of these fancy high-end products, I consider Sportskings to be an exception to the rule because it is not a licensed product. Had this been a release by Topps, Upper Deck or Donruss/Playoff, I would probably have a beef with it.

This is mainly because I don't think a player collection necessarily has to have all of the unlicensed cards to be considered complete. I know there are several collectors out there who would disagree, and that is perfectly alright with me because player collecting is what you want it to be.

You're first chance to get some of these cuts come on July 28 when Sportskings hits stores.
Posted by Andrew Harner at 5:52 PM