When will the nonsense end? 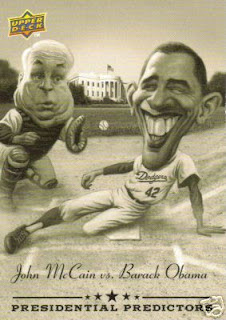 Guess what everybody? There is another gimmick card in a 2008 base product.

This time around, Upper Deck is the culprit.

John McCain is the catcher in the card and only two have surfaced on eBay with the first selling for a best offer of $160. The second auction currently has a bid of $102.50.

According to the two auctions, this card is a rare SP similar to the Hillary Clinton card in Upper Deck Series One. The current auction alleges they pulled just one of these cards from two cases of Series Two.

I think it is time for these companies to realize that people aren't going to bring up the media hype that the Topps Jeter and Upper Deck Clinton cards got anymore. Everyone lost their money on those two and are no longer going to spend bookoo bucks on these types of cards.

Has anyone noticed that the Topps Kosuke Fukudome is selling for just $30-$50 anymore? People just aren't inclined to put down good money for gimmicks.

Both companies need to realize this before they both lost a ton of customers.
Posted by Andrew Harner at 3:36 PM