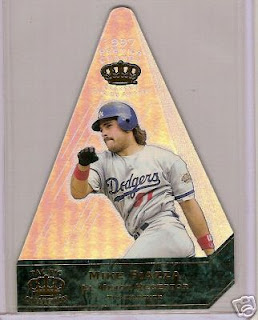 As requested, I will feature another late 1990s forgotten set.

This time around, let's take a trip back and remember one of the rarest sets to find back in those days: Pacific Cramer's Choice.

From 1996-2001, Pacific offered up a hard-to-find, die-cut insert set called Cramer's Choice, which featured ten stars of each year the set was released.

Inserted one in every 721 packs of Pacific base, Cramer's Choice was a tough find for even the most advanced collectors. And in those years, these were some of the highest priced new cards in the hobby.

Today, there is only one of the Carmer's Choice cards that list for $100, and that is the 1996 Cal Ripken Jr. In May 1999, there were several cards that booked at twice that amount.

The 1998 Mark McGwire listed at $250 at that time, but today only books for $60. Part of that was McGwire's decline in baseball and the hobby, but some of it also contributed to the lack of interest in this set nowadays.

Commons from these years of Cramer's Choice can be had for $15. This is because this set has been on the decline as more and more game-used and autographs flooded the market and captured the hearts of collectors across the country.

However, there some similar sets to these that do get released in new sets. An example if the 2008 Topps Heritage Chrome Refractors Black. These are inserted one in every 450 retail packs and commons are worth $50.

But, there are also sets like 2008 Topps 50th Anniversary All-Rookie Team Gold which are inserted one in every 1,290 retail packs. There are four cards listed at $30 and they are the most valuable cards in the entire 50 card set despite them being rarer finds than Cramer's Choice.

For those wondering, the Piazza pictured above used to book for $120, but now is only worth $40.

I hope you have relished in the joy of remembering another forgotten set of the late 1990s.
Posted by Andrew Harner at 12:22 PM

I was thinking of preparing a post on these cards on 'Things Done to Cards" when I found your post. You beat me by almost a month. Rats!

So who was Cramer anyway?

You know I'm not really sure, but I think he was a higher up in the Pacific company.