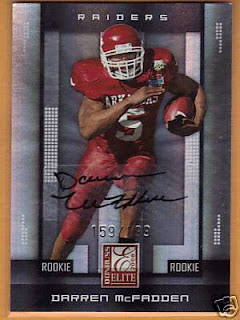 Feast your eyes upon the hottest card on the football market.

With today's release of Donruss Elite football came a new Darren McFadden autograph card that collectors are expected to pay between $200 and $300 for.

With Peterson's meteoric rise to the top last season, collectors are expecting McFadden to follow a similar path in the 2008 season.

If you were to pull one of these, would you sell now and hope he busts or save it and hope he explodes?
Posted by Andrew Harner at 1:00 PM

Save it---ya gotta save it.

Unless someone wants it so bad they give you some crazy amount, then sell it---definitely sell it.

But I think I would keep it hoping he blows up.

I have a hard time keeping stuff as investment when I know I can get a couple hundred dollars for it now, but I think I would hang out to it praying we don't have the next Curtis Enis on our hands.

So I should let go of all my Curtis Enis cards?

It might be time. You don't still have a collection of Ki-Jana Carter lying around do you?

It depends--how much will you give me for em?

You would have to pay me to take those...lol