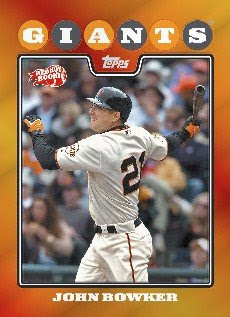 Topps made headlines with Red Hot Rookie #1, Jay Bruce, but has some raised some questions with its next two selections: Justin Masterson and John Bowker.

These selections are worthy to be within the 20 card redemption set, but why in the world are they the second and third selections when they are several other rookies that collectors want cards of far worse than they want cards of Masterson and Bowker?

For those who don't know (I'm guessing that's many of you), Bowker plays in San Francisco.

Of course, as I've mentioned before, Topps is certainly going to include these players on a delayed basis to generate interest in the redemption cards. However, with each passing redemption that is not one of the top star rookies of the year, the more frustrated many collectors will become.
Posted by Andrew Harner at 2:36 PM