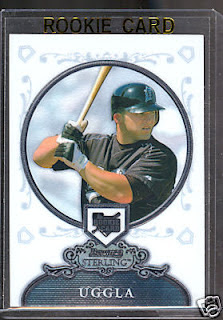 After pitching a fantastic game, the Phillies' Cole Hamels could only watch as the bullpen allowed the Marlins to come away with a win.

So far this season, Uggla is hitting .298 with 19 home runs so you can expect that he is going to get some hobby notice about the time the All-Star Game comes around.

It isn't too late to start an Uggla collection, but if you plan to start one, you might to get going here pretty soon before Uggla has his breakout year (which could very well be 2008).
Posted by Andrew Harner at 10:01 AM