Fukudome finally has his Topps RC 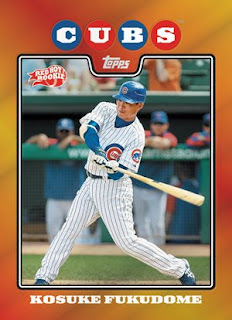 At about 6:30 p.m. Eastern Time, Topps has made me feel better about the company by announcing that the fourth Red Hot Rookie in 2008 Topps Series Two Baseball is Kosuke Fukudome.

After all the trouble Topps got into with the blog world after their Fukudome WBC card, it's a pleasant sight to see a "real" Fukudome rookie hit the market. While this still won't be considered a true rookie card, it is good that Topps finally has put Fukudome in a Cubs uniform on a card.

Of course, Fukudome was featured in eTopps earlier this year, but not too many collectors really count those in the rookie card department either.

When Fukudome wasn't announced as the second redemption, I made a couple of predictions about this set that turned out to be wrong, and I do want to admit I was off in those guesses.

I had two scenarios that I figured would happen. The first was that Topps was getting Fukudome to autograph these cards, and the second was that they would wait to release Fukudome as redemption #20 just to generate interest and chatter about the set.

However, they proved me wrong by putting him the set today, and I give many thanks to Topps for doing something right again.

Also, thanks to Chris Olds for posting this story. I haven't seen it on the Topps website or Beckett's website yet.
Posted by Andrew Harner at 7:26 PM