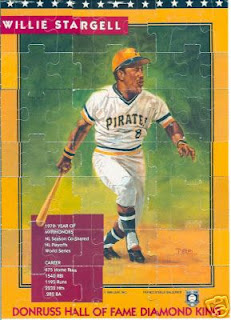 From 1982-1991, if you bought enough packs of Donruss cards, you eventually would find all 63 pieces to a special 8X10 inch puzzle the company put out each year.

Coming at the rate of three pieces a pack, the puzzles added another element to collecting Donruss cards. Besides the base set, collector's had a challenge in finding all the different pieces to the puzzles.

After a court ruled that Topps was the only company allowed to have gum included in every pack of cards in all releases after 1981, Donruss had to find something new to include in their cards to compete with their rivals Topps and Fleer.

Fleer decided to produce stickers in 1982 and Donruss opted to introduce Diamond Kings and the Diamond King Hall of Famer puzzles.

Additionally, a Mickey Mantle puzzle was in 1983 Donruss Action All-Stars jumbo cards, a Ted Williams was released in the 1984 set and a 12-piece Yogi Berra can be found in 1985 Diamond Kings Supers. There was also a Berra puzzle released in 1990 Leaf, a Rod Carew in 1991 Leaf and a Harmon Killebrew in 1991 Studio. The latter two being the only two I am missing.

When the Diamond Kings became their own insert instead of the first 27 cards in the base set, the puzzles went by the wayside, but the several that were produced are great collector's items.

The only problem with these puzzles is that they don't always stay together well or sometimes the pieces won't fit together correctly. This is a big problem on Babe Ruth puzzle which was produced on thicker stock than all the rest.

But, if you can get these into frames, they look stunning and won't fall apart.
Posted by Andrew Harner at 4:48 PM

They stay together fine if you use about a half roll of scotch tape on 'em!

I just picked up a big box of baseball cards off the street from an eviction. It has hockey, football and baseball. There is one sealed pack DonRuss series 2 Willie Stargell 3 piece puzzle and 15 cards (1991) I don't have a clue what to do with them as I am not a collector.
Lee Parmeter
losone@cableone.net