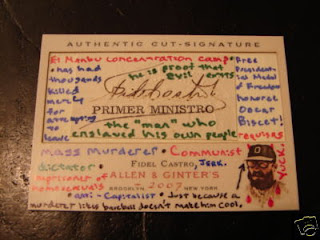 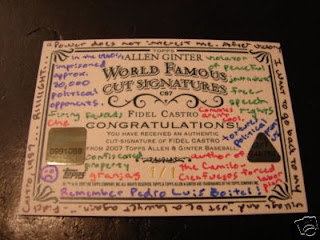 Back
One collector paid $5,500 for the 2007 Topps Allen & Ginter Cut Signature 1/1 of Fidel Castro last year because he thought that Topps had crossed the line of decency for a cut signature card.

So, he did a little tampering. And by a little, I mean a lot. And now is trying to resell it.

By adding phrases and words that symbolize Castro in his mind, the seller, markkali, feels he has a better chance at raising money for The Center for a Free Cuba (CFC). Currently, the card has a bid of $2,000.

The card first appeared on eBay last year, but the listing was not in compliance for charity auctions.

This is a sample of what the seller said to Sports Collector's Daily in March.

While acknowledging he was potentially destroying the value of the card, markkali indicated he was hoping to "send a clear message to Topps and other trading card manufacturers that they should refrain from glorifying mass murderers" and hoping "in my own way to destroying the all-too-pervasive lamestream media myth that Castro is a good guy". He also stated he was hoping to "raise awareness that political prisoners and journalists are still to be found in Cuban prisons, and promote the ideals of the American founding: that each and every human being -- not just Americans, incidentally -- intrinsically enjoys the inalienable rights to life, liberty, and the pursuit of happiness."

For full information about what the seller is trying to achieve, click the auction link above.
Posted by Andrew Harner at 3:45 PM