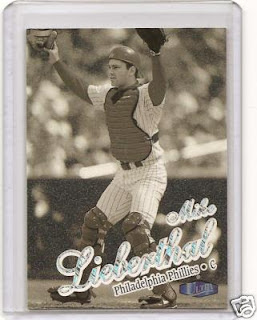 Mike Lieberthal signed a one-day contract with the Philadelphia Phillies yesterday in order to officially retire with the team he played all but 38 of his career games for.

Lieberthal was never a huge name in the hobby but he did gain some exposure during his All-Star seasons in the early 2000s.

Now that he is retired, it is unlikely he will too many more card releases leaving him with 1,037 cards ranging from 1990-2007.

His rookies hail from 1991 and are very inexpensive with the Bowman topping the base values at $1. The most expensive parallel is the Topps Desert Shield at $15.

Outside of rare cards not priced due to scarcity, his most valuable card is the 2004 Bowman Heritage Mahogany which is valued at $50.

So if you are looking to start a new player collection, Lieberthal may be a guy to consider because you should be able to put together quite a collection of his for pretty cheap.
Posted by Andrew Harner at 7:07 AM