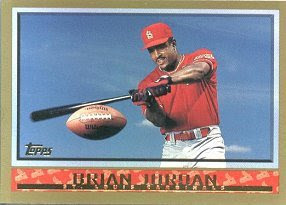 It's no secret that Brian Jordan was a dual-sport athlete, but I don't know how many people know the rules of the game he created to combine baseball and football.

From the looks of this card, the game is played in the sky, and the object is for the pitcher to throw the football against the laces so it hits the bat longways.

And because there are no baseballs or tackling involved, players don't need to wear helmets.

However, the sport only had two athletes: Jordan and Nolan Ryan. And it didn't help that Ryan was throwing the football from Spring Training on the ground up to Jordan in the sky. 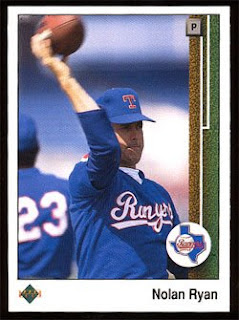 Maybe it Jordan tried to come back with Ryan today, this sport would take off like Oreo's Double Stuff League with Peyton and Eli Manning.

Well, maybe not.
Posted by Andrew Harner at 5:15 PM