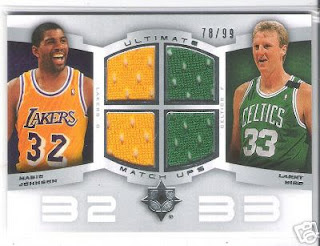 It's like Upper Deck knew that the Boston Celtics would meet the Los Angeles Lakers in the NBA Finals.

With an 89-81 win last night against the Detroit Pistons, the Boston Celtics ensured the NBA would see something it hadn't, but desperately wanted to see, since 1987: A Lakers/Celtics final.

However, the make-up of the current Boston team is far different that the old teams as Boston simply traded for their team outside of Paul Pierce. The Lakers also added Pau Gasol in the middle of the season.

But it is details like this that will be ignored because this rivalry is being renewed starting Thursday.

Expect cards of Kevin Garnett, Ray Allen, Paul Pierce, Kobe Bryant and Pau Gasol to all see a spike in value during the series, especially if it goes seven games. Also be on the look out for lower name role players like Eddie House, Rajon Rondo, P.J. Daniels, San Cassell, Derek Fisher and Vladimir Radmanovic to become desired by collectors across the country.

My suggestion: look through your common boxes and your cheap game-used and autos and see if you have any of these guys. I did this and found an Eddie House auto and a P.J. Daniels auto so you never know what you may find.
Posted by Andrew Harner at 8:09 AM